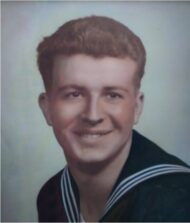 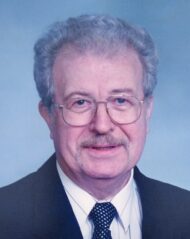 William Jay Stewart, 88, of Lancaster died peacefully in his sleep early on Monday, November 8, 2021 at St. Anne’s Retirement Community, Columbia, Pa. He was the husband of the late Virginia C. Braungart Stewart. They had celebrated 52 years of marriage before her death in 2007. Before his move to St. Anne’s, Mr. Stewart had lived 62 years at 764 Poplar Street in Lancaster’s Cabbage Hill neighborhood.
Born May 13, 1933 in the parlor room of his parents’ tenant farmhouse in Clarks Mills, Mercer County, Pa., he was the son of the late James Jay and Flossie M. Diefenderfer Stewart. After moving in 1936 to his parents’ own 24-acre farm in Fredonia, Pa., he then attended a one-room country school for his first eight grades. In 1951, William graduated fourth in his class of 33 from Stoneboro High School, Mercer County, Pa. He attended one semester at Gannon College, Erie, Pa., but withdrew for lack of funds.
His military service included Army ROTC while in college followed by four years active service in the U.S. Navy, where he advanced to Fire Control Technician Second Class while aboard the U.S.S. Walworth County (LST 1164), then served four more years in the U.S. Naval Reserve until 1960.
Apart from the many farm chores during his youth and duties while in the Navy, William’s early work experience included memorable jobs such as testing coils on a production line making three refrigerators a minute, operating a drill press in making brass faucets, and attempting to sell women’s shoes.
Beginning in 1956, Bill’s career was with Armstrong Cork Company (later, Armstrong World Industries) at its Research and Development (later, Innovation) Center in Lancaster. He was an inventor, earning two co-patents for non-stick coatings. He retired in 1993 as a Research Technologist, but continued to consult for a time.
Mr. Stewart was a devoted member of St. Joseph Catholic Church and participated in numerous church activities. These included service as a festival and bingo worker, church cleaner, and Lenten Appeal captain, but his special calling for many years was as a Eucharistic Minister and home visitor. In recognition of his example and dedication, he was given the Fr. Lawrence Gross Memorial Cabbage Hillian Award in 2013.
With his wife Ginny, Bill traveled throughout the United States, the Caribbean, Europe and Canada. He also enjoyed reading, newspaper puzzles, and theatergoing. He had joined with his wife in activities such as genealogy, lighthouse “hunting,” story-telling and photography. He was a blood donor at St. Joseph Hospital for many years. Above all, he showed great love for all of his family—in their joys and successes as well as in their sorrows and troubles.
Surviving are four children, Kevin M. married to Roseanne Breneman Stewart, Matthew J. married to Cynthia Wise Stewart, Maureen S. married to Raymond R. Peterman all of Lancaster, and Karen M. married to Robert D. Swinehart Jr. of Strasburg, Pa. Seven grandchildren: Daniel, Amanda, Ryan, Kimberly, A. B., Travis, and Henry. Seven great grandchildren: Christopher, Nevaeh, Carter, Cassidy, Brielle, Ryan Junior, and Colton. Three nieces and eight nephews. William had survived all his siblings—his brother Paul, and his sisters Vada and Anna. Of their spouses, only Anna’s husband, McCrea (Budd) Kunkle survives.
Relatives and friends are respectfully invited to attend a Mass of Christian Burial at St. Joseph Catholic Church, 440 St. Joseph Street, Lancaster, Pa. on Saturday, November 20, 2021 at 11:00 AM. Interment will be in St. Joseph New Catholic Cemetery, Bausman, PA. A viewing will be held at the Charles F. Snyder Funeral Home, 414 E. King Street, Lancaster, PA on Friday evening, November 19, 2021 from 6:30-8:30 PM and on Saturday morning at the church from 10:00-11:00 AM.
Please omit flowers. Contributions may be made in Bill’s memory to St. Joseph Catholic Church organ fund, 440 St. Joseph Street, Lancaster, PA 17603.

My wife Helen Knouff was in Bill & Ginny’s wedding many years ago and became very close friends. I met Bill here at St. Annes home alittle over a year ago. We went to dinner together every night and sat outside on our rockers after supper and talked. It was a shock to hear of Bill’s passing. Now Bill and Ginny will be together again. He spoke regularly about her. Bill was my only friend I had here at St. Anne’s and he will be missed by all. Gilbert L. Knouff

Sorry to hear of the loss of your father.  He was a good neighbor who lived next door to us.
Lorraine Stoll

I worked with Bill at Armstrong for many years. He was a great guy and always a gentleman.
My sympathies–he will be missed.