We create funeral services for Lancaster veterans where a life is celebrated and a commitment to our country is honored.

The Charles F. Snyder funeral directors pride themselves in helping families of veterans plan services that are fitting for those who have served our country. We understand the sacrifice every person makes when they serve in the military, and we work extremely hard to honor that sacrifice by creating exceptional funerals for veterans in Lancaster County.

By sitting down with family and loved ones, we try to understand the significance of the military in the life of the deceased. This allows us to incorporate their experiences, medals and honors awarded, service uniform and memorabilia into a military tribute fitting for each man or woman’s service to our country. 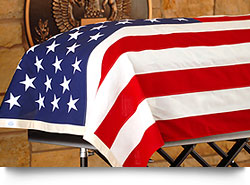 For many families of veterans, we create a funeral that is tightly integrated with the service life of the deceased. Uniforms, medals, relics, photos and videos are often important parts of the visitation (or viewing). Funerals can involve military pall bearers in and out of a funeral home or place of worship and at the cemetery, depending on the rank of the deceased. Graveside services for veterans have involved active-duty and retired service men and women, including gun salutes and military bugle calls (Taps) in military honor.

We are proud to be involved in these salutes to veterans.

More information regarding the benefits your loved one may be entitled to is available on the Veterans & Family Memorial Care web site.

Many veterans are eligible to receive benefits from the federal or local government.

Many veterans are eligible to receive benefits from the federal or local government. Because benefits are not paid automatically, and because not all who have served are eligible, it is important to investigate eligibility and how to apply for benefits on the U.S. Veteran’s Affairs Office web site or by calling (800) 827-1000. The staff at Charles F. Snyder funeral home can also assist in some of the arrangements.

To be eligible for military benefits, the deceased must be a veteran discharged or separated from active duty under conditions other than dishonorable, and have completed a required period of service.

For Burial in a National Cemetery

For eligible veterans who elect to be buried in a national cemetery, the following benefits are available, all at no cost to the family:

If the veteran has been cremated, the cremains are buried or inurned in national cemeteries in the same fashion and with the same honors as casketed remains.

Benefits for spouses and dependents

The immediate family (spouses and dependents) of veterans are also eligible for burial benefits in a national cemetery, at no cost, including:

Eligible spouses and dependents may be buried with benefits even if they predecease the Veteran.

For Burial in a Private Cemetery 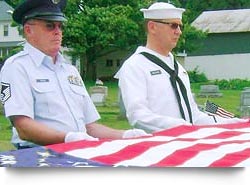 The burial benefits available for Veterans are different if they choose to be buried in a private cemetery. These no-cost benefits include:

There are not any benefits available to spouses and dependents buried in a private cemetery. 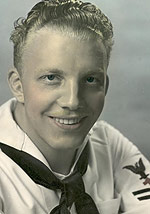 Our founder, Charles F. Snyder Sr., served in the United States Navy during World War II from 1942-1946. Charles was proud of his service time and continued to show veteran support by being a member of the American Legion Post 34 for over fifty years, Veterans of Foreign Wars Post 7294, and Catholic War Veterans Post 1192.

Charles F. Snyder Sr. proudly served in the United States Navy during World War II from 1942-1946. He was stationed on the U.S.S. Barnes and later the U.S.S. Noble. The Barnes provided personnel and air support in many raids of Tarawa Atoll in the Gilbert Islands and replenished aircrafts to the 3rd fleet during the Caroline Islands Operation.

Before Charles was stationed on the Noble, the Barnes finished out its missions by carrying service men from the Pacific Islands back to Hawaii. The Noble traveled to Okinawa to provide ground troops and equipment for the Battle of Okinawa. Following the end of the war, the Noble was part of the Operation “Magic Carpet” which brought American Troops home from the Pacific Islands to California. Charles took part in all three campaigns. 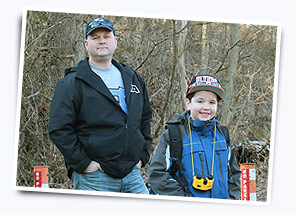 Speedwell Forge County Park, north of Lititz, is a favorite destination for both my son and I several times a year. Its winding hiking trails always seem to be a bit less-traveled than some of the other parks, which is fine with us. He enjoys the thrill of the search for wildlife that lives there, especially the deer and the elusive Great Blue Heron. Admittedly, so do I. — Mark Burkholder Licensed Funeral Director; Supervisor, Millersville, PA Location