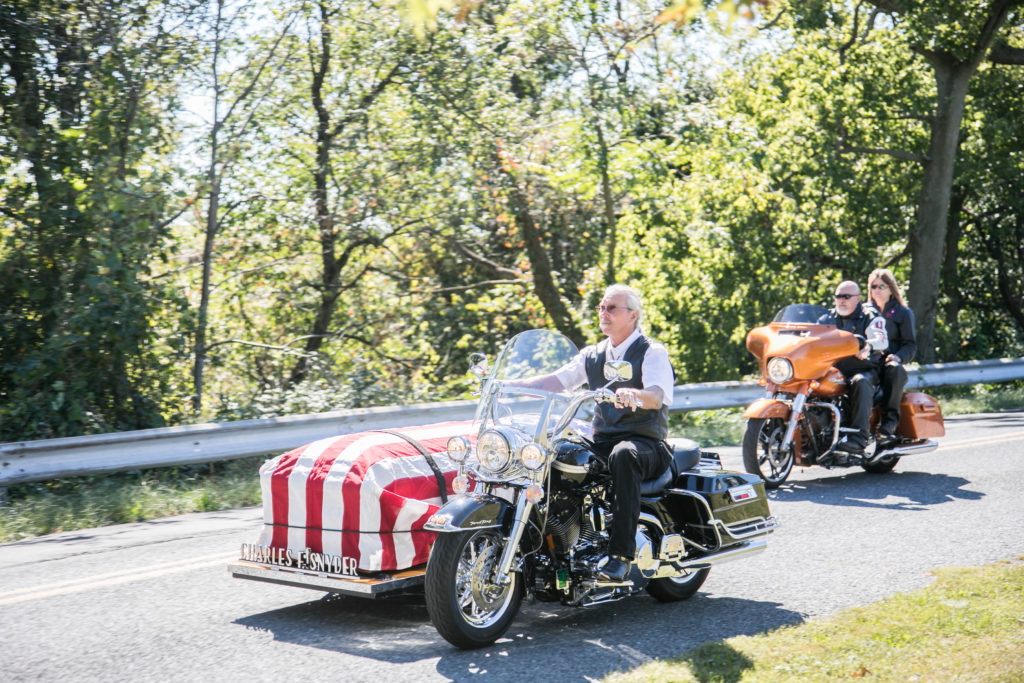 The History of the Harley Hearse

In 2002, Wrightsville resident Al Skinner wanted to fill a void in the tristate area. He figured that if firemen had firetrucks as escorts in funeral processions, why not have a motorcycle escort for motorcycle enthusiasts?

Skinner retired in 2009 leaving a void yet again until summer 2017, when Chad Snyder approached him. From there, Skinner reconstructed the old chassis to fit the funeral home’s needs. The search began to find a 100th Anniversary Harley that would adapt to fit the original chassis, since Harley changed frame styles in 2009.

Once the 2003 100th Anniversary Harley Road King was found, Skinner started on modifications. They included reverse gear, modified motor, and extra chrome for the “bling” effect. Lastly, a table was custom made from Birch wood that has a marine varnish, typically used for boats. A gloss coat was added for a finished, elegant look.

In order to make modifications, Skinner made calls to hearse manufacturers for dimensions to ensure the table would fit perfectly to the chassis. The hearse was also modified to not only hold an urn, but rather an urn ark for a ceremonial display. What’s unique about the Harley hearse is that typically motorcycle hearses are on trailers behind the bike. This hearse features an elegant table on a chassis next to the motorcycle, for a modern approach on an old concept. This concept allows open air for their last ride.

Before retirement in 2009, Al Skinner was a funeral escort. He escorted funerals from Connecticut to West Virginia and everywhere in between.

There have been processions for those who have rode all of their lives to people who always wanted to ride but never got the chance.

When asked what was one of the most memorable, Skinner said “All of them, you never know what will happen, or what the dynamics are. Every service is different.” There was one service that stuck out to him. “A 31 year old man, who had a developmental disability had always admired motorcycles. No one in his family rode, and when I showed up, the father said “he’ll finally get his sidecar ride.” He learned that the man worked at a fast food chain and made friends with a few of the cycle club members –about 5 or 6 groups. He had a real passion for motorcycles, so making friends came easy with a common interest. Members from all groups would take him for rides around the block or take him for a spin in his development.

Once the man became too fragile from cancer treatments, his parents thought the rides might not be the best idea, given his decline in health. The man responded with “well Dad, I just need a sidecar, then I could ride again.” Skinner was able to make his wish come true. As rewarding as it is to fulfill the wish, it’s also about creating the experience for the family at the service. It truly puts a new spin on “riding in the wind.”