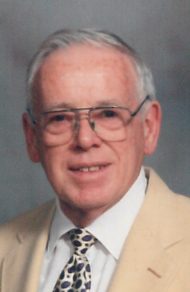 William E. Alexander, Jr., 94, passed away at Brethren Village on Thursday, July 26, 2018. Born in Lancaster, he was the son of the late William E. and Abbie (Posey) Alexander, Sr. He was the husband of Esther Alexander, of Brethren Village, with whom he celebrated 23 years of marriage. Previously, he was married to the late Grace H. Alexander until her death in 1993.
Mr. Alexander was a graduate of McCaskey High School and Lehigh University. He served in the US Army during World War II. William retired from Armstrong World Industries after 33 years as an engineer.
William was active in the Rotary Club. He volunteered at the Lancaster General Hospital, drove for Meals on Wheels and did tax returns on a volunteer basis. He was a long-time member of Hempfield United Methodist Church.
In addition to his wife, William is survived by a daughter Joni Alexander, wife of David Harwood, of Toronto and sons William, husband of Diane, of Mountville and Raymond, husband of Joleen, of Spring Mills, PA, seven grandchildren and seven great-grandchildren.
Funeral Services for William will be held at 11AM, Tuesday, July 31, 2018 at the Brethren Village Chapel, 3001 Lititz Pike, Lititz, PA 17543. Family and friends will be received at 10:30AM until the time of the service. In lieu of flowers, contributions in William’s memory may be made to the Brethren Village Good Samaritan Fund at the address above.

Hi Esther,
So sorry to read of Bill passing away.  We so enjoyed being your neighbors in Blossom Hill.  I think about the two of you all of the time.  We will keep you and the family in our prayers.    Karen and Mark Arbogast

I am sorry to hear of the passing of Bill. He and Grace welcomed me into their home for a year in 1980 while I was teaching in Mount Joy . We remained in contact and it was always lovely to hear of the busy and interesting life he had .
My condolences to the family , but I’m sure you’ll be comforted with the thought that Bill had a good, long life.
Ann Colder , nee Salt. Derby, England.