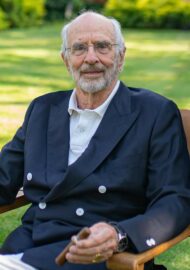 Born in Haarlem, The Netherlands on May 19, 1935, Willem van Huystee (Pim) was the fourth and last child of A. Marius J. van Huystee and Elisabeth M.A. van Huystee-Bies. He was the devoted husband of Theodora A. van Huystee-van Bruggen.

Willem’s family lived in the town of Heemstede, near Amsterdam. In his earliest years, the van Huystees and van Bruggens together with all of the Netherlands endured the occupation by German Forces during World War II. German bombs landed near Willem’s home and devastated much of the surrounding community. His memories of those times stayed with him, recalling and sharing them during intimate discussions about his family history.

Following the War, normalcy returned for Willem’s family. Willem’s athleticism blossomed in his late teens. As an active young man, he enjoyed many sports, but it was rowing that captured his spirit. Willem was Rowing Champion of The Netherlands more than once and a finalist in the European Championships. He celebrated victory at a number of regattas across Europe.

Willem graduated from the Kennemer Lyceum in 1953. He directly joined the van Huystee family’s tobacco trading business, starting from the ground floor as a trainee. Immersing himself in all thing’s “tobacco”, he travelled during his training to Germany, Italy, and the U.S. His professional training was interrupted for a few years by military service. From 1954 through 1956, Willem served in the Heavy Tank Corps of the Dutch Cavalry. He ended his service as a First Lieutenant in the Cavalry Reserve, and returned to the business he would remain drawn to and a part of until his final days.

In 1959, he married the love of his life, Thea. Their marriage started a lifelong journey to all of the reaches of the globe. Willem had already accepted a position with a Dutch firm with substantial international interests and was dispatched to Hartford to work in the export of Connecticut wrapper tobaccos. Willem and Thea arrived as newlyweds in America in classic immigrant style–on a boat in New York Harbor. Several years later, Willem joined Lancaster Leaf Tobacco Company. During his service to them, Willem, and Thea (and by then Maarten, Lieke and Tete) lived in the Philippines, Holland, and Belgium before settling back in Lancaster in 1968. Willems’s work for Lancaster Leaf continued as a Senior Vice President and Director with primary responsibility for overseas operations, traveling extensively in Europe, Africa, the Far East and South America. In 1978 Willem formed his own tobacco leaf importing company, Intertrade Incorporated.

Willem had a keen affection for beautiful things. And not only for Thea whom he adored, protected, and relied upon until the end. He also enjoyed and collected fine art, had a near obsession with watches, loved cameras and the photos he could produce with them. But nothing could command his attention like the automobile. He restored cars. He collected cars. He bought them. He sold them. He raced them. “I just like cars. I like the way they look. I like the way they feel. I like the way they sound.” His primary early interest was Mercedes Benz, especially the 300 Series of the fifties and early sixties. In his later years, he ran the Mille Miglia race across Italy ten times, which meant acquiring and restoring pre-war European racing cars. Willem’s last car restoration was a 1934 Riley MPH, which had been broken down and stored in boxes for many years. The widow of the previous owner had heard of Willem, sought him out and turned stewardship of the boxes over to him. For several years, Willem presided over the assembly and restoration of the Riley, culminating with the presentation of it in the spring of 2021 at the Amelia Island Concours d’Elegance where it was awarded Best in Class.

Always an avid linguist, he was fluent in German and English, and could hold a spirited conversation in French or Italian as well. Etymology was a favorite too. Family dinner conversation often diverted toward the origin and meaning of words in Greek or Latin, usually ending with him popping up and running for his Funk and Wagnalls to prove his assertion of the moment (and usually his son-in-law wrong—it worked sometimes but not always). And yet, to his last days no one could miss his Dutch accent. He never yielded his affection for his homeland, its people, or its flag. He remained a Dutch citizen to the end.

Willem was a member of the Lancaster Country Club, where he was a half-century card carrying member of the “Court Jesters”. The Jesters were among the best of his friends in Lancaster. During the colder months of the year, he would transfer his racquet skills to the Hamilton Club squash courts. He was a loyal and trusted friend. He maintained and nurtured friendships with friends from his early days. Old rowing mates, business associates, car enthusiasts all stayed at the front of his Rolodex. People he met in random and casual ways during his travels often ended up among the closest of his friends. Indeed, in the early 1990s Willem joined a local group of gentlemen who planned an annual event to enjoy fine wines, exquisite food, oratory, each other’s company, and of course cigars. Distinguished guests from near and far have descended on Lancaster each October since to enjoy the Churchill Society Dinner.

What started with just Willem and Thea steaming into New York Harbor in 1959 has blossomed into a true American family success story. They created a life and are surrounded by the love of their children Maarten, Lieke and her husband Bryan, Tete, and an assortment of grandchildren, great grandchildren, and others who either have already or may likely soon contribute to the dilution of Willem’s gene pool. Grandchildren: Michael (deceased), Kristoffer (Katya), Anna (Kevin), Jacqueline (Ian), Katarina (Michael), Lisbet, William (Kirsten), Kullen, Morgan (Katie), Dylan; Great grandchildren: Jocelyn, Dima, Anneke, Charlotte, and Theodora. And a broodje in de oven.

Willem’s family and friends will be gathering for a private celebration of his life.

The family asks that in lieu of flowers that friends consider supporting Hospice & Community Care 685 Good Drive Lancaster, PA 17604 whose selfless care was invaluable to Willem and his family in his final time.

Deepest sympathy to Thea and family.
Remembering Pim for the positivity of his indomitable flamboyant personality and many accomplishments.
Ron and Dee Smith

Mr. Willem was a fine person, a very sincere , dedicated and honest person and a very good mentor for me. It is very rare to find people who as upright and as principled like Mr. Willem . My Deepest and heartfelt condolence to you and your family.
Dheeraj & priyanka

Dear Family,
I am so sorry for your loss.  What wonderful memories I have from “the neiborhood” and seeing your Dad.  He was a wonderful friend to my parents for many years.  I wish you all peace and comfort.

Dear  Thea and family, what wonderful memories we have of sports with the boys and talk of cars . Willem was bigger than life for Scott, except he could beat him on the squash court. Scott said, ” a life well lived”!
I know he influenced my husband in
many positive ways!
Pat and Scott Oberholtzer

Te & Leike – My condolences in this difficult time. Your father was a great man. I still remember the days 40 years ago coming to your house and he would have those cars layed out piece by piece in the driveway and garage. To this day I remember being amazed. He lived an incredibly life.

Dear Tete and Family,
I was so sorry to hear of Mr van Huystee’s passing.  You are in my thoughts and prayers.
Sincerely,Roma Ketron Wickersham

Dear tante Thea, children and grandchildren,
Our heartfelt condolences go out to you.
Oom Pim will be missed especially he was the last of the 4.
We embrace you with love and warmth and thinking of you in this difficult time.
Keep strong!

Dear tante Thea and family, we are truly sorry to hear of the loss of ‘oom Pim’. Our heartfelt condolences go out to you. We will fondly  remember our visit to Lancaster and your family reunion visit to the Netherlands. Love,