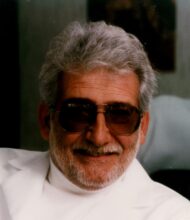 Vincent G. Corradino, 82, of Lancaster, passed away on Monday, November 22, 2021. Born and raised in Lancaster City, he was the son of the late Nicholas and Minnie Mae (Nolt) Corradino.

A well-known hair stylist in Lancaster for more than 45 years, Vincent was the owner of Vincent & Company hair salon on Fruitville Pike. He served with the US Coast Guard and the Coast Guard Reserve. Vincent found enjoyment at the Delaware beaches where he spent much of his time on the water fishing with his family and friends. He was a lifelong Dallas Cowboys football fan, loved watching TV sitcoms (especially Cheers), had a deep fascination with wolves in the wild, and most importantly spending time with his grandchildren.

Vincent is survived by his son, Chad Corradino, husband of Kara of Lancaster. He was lovingly known as Bebop by his grandchildren: Emmi Bevensee (partner of Ember Buck) of New Zealand, Nathan Lefevre, Mia and Kylie Corradino of Lancaster, and great-grandchildren: Anakin Lefevre and Luca Buck-Bevensee. He is also survived by brothers: Michael Corradino, husband of Sharon of Willow Street, and Robert Corradino of Ithaca, NY, as well as former wife, Joan (Bouder) Corradino of Lancaster. Along with his parents, he was preceded in death by his son Vincent Todd Corradino, a sister Josephine Squitire, and brothers Nicholas and John Corradino.

A viewing and time of greeting will take place from 6-8pm on Sunday, November 28, 2021, at the Charles F. Snyder Jr. Funeral Home & Crematory, 3110 Lititz Pike, Lititz, PA 17543. No services. Interment will be private at the convenience of the family. In remembrance of Vincent Corradino’s life, the family asks that any charitable donations be made to the Wolf Sanctuary of PA, 465 Speedwell Forge Rd, Lititz, PA 17543

Dear Chad – Sending my condolences to you & your family in the passing of your Dad.  Wishing you peace and comfort –
In sympathy,  Jared’s mom