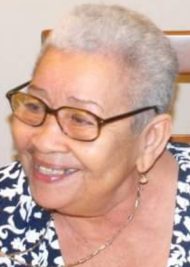 Victoriana Alvardo-Merced, 83, of Lancaster, passed away Friday, June 23, 2017 at Lancashire Hall. She was born in Puerto Rico, to the late Serafin DelValle and Maria Merced.
Victoriana loved her faith and spending time with her family. Victoriana loved to joke around and had a wonderful sense of humor. She will be remembered for her loving personality, her humbleness and “Words of God” wisdom. She was a beautiful person who would give everything she had to those in need.
Surviving are her children: Pedro R. Manzanares (Martha) of New Jersey, Hector L. Manzanares of Lancaster, Maricelis Manzanares of Lancaster, Rafael A. Manzanares (Maritza) of Millersville, Evinelis Manzanares (Wilfredo Garcia) of Puerto Rico, Rene Manzanares, and Ivan Manzanares of New Jersey; 1 brother and 2 sisters; She is also survived by her 21 Grandchildren, several great-grandchildren and numerous great-great-grandchildren. Victoriana is preceded in death by 2 brothers; 2 sisters and 1 grandchild.
The family would like to thank Lancashire Hall for their compassion and support during Victoriana’s stay.
Please omit flowers. Memorial Contributions may be made in Victoriana’s memory to Lancashire Hall, 2829 Lititz Pike, Lancaster, PA 17601.
The family will hold services and burial in Puerto Rico.