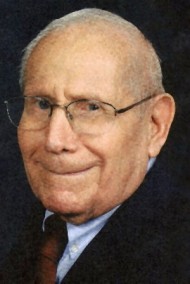 Thomas M. Garber, 97, of Brethren Village, Lancaster, PA, passed away on November 7, 2015. Born in Elizabethtown, PA, he was a son of the late J. Hoffman and Laura Garber. Soon after his graduation from Indiana State Teachers College, he enlisted in the military and served for four years in the United States Air Force during World War II. He was located in England, North Africa, and Italy.

In 1945, he joined the family Ford business, Garber’s Garage, which was founded by his father in 1917. By 1946, two of his brothers, Henry M. and Joseph M., had also joined the enterprise then renamed Garber Motor Company. In later years, a Honda motorcycle franchise was obtained for Elizabethtown, and soon thereafter, a Honda motorcycle business was established in Lancaster.

Tom was active in the Elizabethtown Chamber of Commerce, and was a member of Christ Church, United Church of Christ, where he served on the Church Consistory.

In 1984, he and his wife retired to Sugarmill Woods, Homosassa, Florida. For many years he was a member of First Presbyterian Church in Crystal River, Florida. Tom was always an avid tennis fan and played with the Sugarmill Woods Tennis Association men’s league until age 88.

Tom was real gentleman. Purchased many cars an trucks from him very fair an honest.  May God an our Blessed Mother watch over him. Blessings. Jim Sparrows7