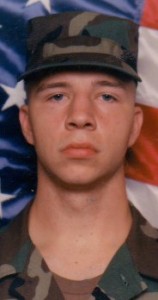 Born in Lancaster, he was the son of James Geiter, companion of Pearl Rankin, of Lancaster and Sherrie Trexler Wiley, wife of Tom Wiley, of Lancaster. He was the husband of McKenna Frankhouser Geiter and they celebrated three years of marriage on September 10, 2006.

Jimmy was a specialist in the U.S. Army serving for four years as a light wheeled vehicle mechanic. He was a 2002 graduate of Conestoga Valley High School. He loved music especially the drums, sports, and his country. Jimmy loved to make people happy especially his family and his daughter, Bianca.

Surviving in addition to his parents and wife are his daughter, Bianca Lee Geiter, at home, his brother, Brandon Geiter of Lancaster, his sisters, Jessica Davila of Lancaster, and Tara Gray of Lancaster, a stepsister, two stepbrothers, and many aunts, uncles, nieces, and nephews.

Funeral services will be held at the Charles F. Snyder Funeral Home and Chapel, 3110 Lititz Pike, Lititz, on Wednesday January 17, 2007 at 10AM. Interment in Indiantown Gap National Cemetery, Annville. Friends may be received on Tuesday, January16, from 6-8PM and again on Wednesday from 9AM until the time of service at the funeral home. In lieu of flowers, memorial contributions may be made in Jimmy’s memory to a benefit account at any Fulton Bank for his daughter, Bianca Geiter.