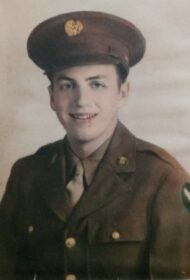 Samuel M. Wagner, 100, a well-known Lancaster artist, passed away at St. Anne’s Retirement Community on Thursday, September 16, 2021. He was born in Reedsville, PA to the late Samuel W. and Mary E. (Alexander) Wagner.

A 1939 graduate of Lewistown High School, Sam completed his associate’s degree in graphic design from Denver Institute of Art in Denver, CO.

Sam enlisted in the US Army during WWII. After scoring very high on the Army General Classification IQ test, he was enrolled in Army Specialized Training Program (ASTP) that was instituted to meet wartime demands for both junior officers and soldiers with technical skills. In June of 1943, Sam was sent to Princeton University to enter their engineering program, during which time he had the honor of meeting Albert Einstein who lived nearby and frequently lectured at the University. After only two semesters at Princeton, Sam was sent to Germany during the Battle of the Bulge to meet immediate combat needs, serving with Company C 413th Infantry, obtaining the rank of Technician 5th Class.

A commercial artist in the advertising industry, Sam co-owned Drawing Board Associates along with his partner Kenneth Kirsten, and he also served as secretary treasurer of Brookshire Printing, both in Lancaster.

Known for his use of oils, watercolors and acrylics, Sam painted beautiful still lifes, predominately flowers. His paintings adorn the homes of many of his family and friends. Sam was a past-president of the Lancaster County Art Association. Sam also enjoyed gardening, dancing, and reading.

A 100th Birthday Celebration was attended by five generations of Sam’s family.

Sam was a former active member of Hamilton Park United Church of Christ, and then joined St. Philip the Apostle Catholic Church, where he served as an usher and was active in the Men’s Club. While residing at St. Anne’s he attended daily Mass when possible.

Surviving Sam are his son, Daniel J. Wagner, husband of Barbara (Doman) of Lancaster, his daughter, Christina J., wife of Sam Keaton of Eden, NC, his step-daughter, Rose Mary T. (Lattuca), wife of Jay Roth of Lewisberry; 4 grandchildren, Kelly (Wagner), wife of David Mastrogiovanni of Lancaster, Christopher Wagner, husband of Gwen (Billow) of Mount Joy, Alexandria (Frisch), wife of Ethan Kinory of Chestnut Hill, and Julianna Frisch of Washington, DC; three great-grandchildren, Kayleigh Wagner, Dalia Kinory, and Leora Kinory; and one great great-granddaughter, Leilani Churchill. In addition to his parents and both wives, Sam was preceded in death by his brothers, Kenneth A. and Robert L. Wagner; and his sister Claire Bryner.

Funeral services will be private.

I knew the Wagner family since the middle of the ’60’s.  I haven’t been in touch for many years except for the service of Sam’s wife Frances Wagner in 2018.
I hope the family is surrounded with much love especially after the long lives they both had lived.

Prayers to All the members of Sam’s Family.  He is at Peace with the Lord.
Dusty, Linnie, Nick and Lauren