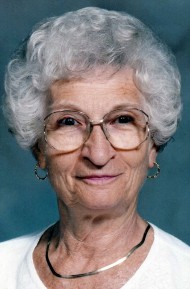 Romaine was born in Lancaster on September 12, 1925 and was the daughter of the late Bernard and Kathryn (Gross) Schaller. She was preceded in death by her first husband James Edward Judge, a Lancaster City Police Officer, in 1959, and by her second husband Chester Reinhart, in 1986. She was also preceded in death by her brother, Bernard Schaller and sister, Veronica Spangler.
She was a graduate of J.P. McCaskey High School.
Romaine will be remembered for her outgoing personality and her joy in working at Dutch Apple Dinner Theater as a hostess for 15 years. Romaine also worked at St. Joseph’s Hospital and even worked as a school crossing guard in downtown Lancaster. Romaine was always willing to assist others any way she could. She loved to crochet and bake, especially for the holidays. She was known not to schedule anything on Friday mornings due to her regular hair appointments.

She was a former member of Sacred Heart and St. Leo the Great Catholic Churches.

Friends will be received on Wednesday, April 29, 2015 for a viewing from 10-11AM at the Charles F. Snyder Funeral Home & Crematory, 441 N. George St., Millersville, PA 17551. A Christian Prayer Service will be held at 11AM at the funeral home with The Rev. James O’Blaney officiating. Interment will be in St. Joseph New Catholic Cemetery.

Deepest sympathy in the loss of your mother and my friend. Had good times  together and fun at Dutch  Apple  Romaine will be missed by many. Loved that gal. Meena  Eichelberger

Our Deepest Sympathies in the loss of your Mother.  She was a wonderful lady and will be missed.  She was our Mother’s roomate at Luther Acres for 2 years and did so much for Mother.  She got Mother out of her shell by getting her to go to all of the activites at the home.  For this we are very grateful to your Mother.  Your family is in our thoughts and prayers at this time.  Dean and Anne Gantz, Catherine Spangler’s oldest daughter.