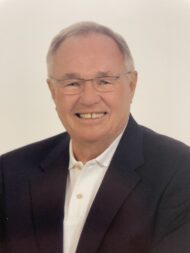 Bob moved to Montevideo as a young man where he met his love and wife of 62 years, Vera Mae Ervin. They were married on July 11, 1959, and blessed with four children, ten grandchildren, four great-grandchildren, countless close friends, vacation travels and many adventures including loving homes in seven states. Bob and Vera retired in Mountville, PA for the last twenty-five years.

Bob was a dedicated employee of Swift & Co (Butterball) for over fifty years. He loved his work and served the company starting in Montevideo, MN at a local creamery and later managing plants in Pennsylvania, Indiana, Minnesota and North Carolina.

Bob was dedicated to his family, friends, faith and community throughout his life. He enjoyed serving as his sons’ baseball coach, serving the Lion’s Club, Knights of Columbus and serving his family in general. He spent his life making memories with his wife, children and grandchildren and celebrated every moment with his great-grandchildren. Leaving work at the office, Bob prioritized everyday life, family dinners, card games, golf, family road trips and vacations. His zest for life, focus and attention with all of his family and friends was admirable.

Surviving him to cherish and pass on his memory are his wife, Vera; his children: Robyn Dougherty (John) of Landisville, PA, Brian Farrell of Hudson, MA, Connie McGuiggan (Tim) of Kirkland, WA and Jerome Farrell (Lisa) of Ocean City, MD; his grandchildren: Shane (Amanda), Jason & Kyle Dougherty, Stuart (Brittany) and Eric (Lauren) Farrell, Patrick, Nicole & Sarah McGuiggan, and Matthew and Hannah Farrell; and his great-grandchildren: Calder and Kilian Dougherty, and Paisley and Adelyn Farrell; as well as many nieces and nephews. He was preceded in death by his parents, Ruth and Thomas and his two brothers Pat and Jerry.

A Memorial Service will take place on Saturday, March 5, 2022, at 2:00 PM at the Charles F. Snyder Jr. Funeral Home & Crematory, 3110 Lititz Pike, Lititz, PA, 17543, where the family will receive guests beginning at 1:00 PM. Interment will follow at a later date in Clear Lake, South Dakota. In lieu of flowers, contributions in Bob’s memory can be made to the Alzheimer’s Association at www.alz.org.

Dear Mrs. Farrell, Robyn, John and family, I am so sorry to hear about Mr. Farrell’s passing.  He made me laugh every time I saw him.  Always jabbing me about his Minnesota Gophers and the Nittany Lions.  He was a pleasure to know and to be around.  Sending love and prayers to all.

Vera, I was so sorry to see Of Bob’s passing.  I tried to call you today, but the number I have is not a working number.  I am so sorry, you were such a special couple.  I enjoyed our chat THis summer and feel bad we were never able to meet with Covid. It is two years on the 25th since Mom passed and I saw you and Bob. You never know what it meant to me to see you there.  If you have time call me, if not I will see you at Bob’s celebration.God bless you and grant you peace and comfort.