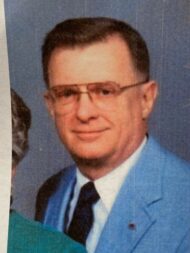 He was the husband of the late Alice G. Stark Borst, who passed away in 2017. Born in Reading, he was the son of the late Charles A. and Rose M. Gross Borst.

Robert had worked in sales contract administration for the ITT Corporation, until he retired in 1995.

He was a member of St. Anthony of Padua Catholic Church and was a 4th degree Knight in the Santa Maria Assembly with the Knights of Columbus as well as Council 867 , where he served in the Honor Guard.

Robert enjoyed golf, bowled for 50 years in the Knight of Columbus League, and was an active member of the Lancaster Liederkranz where he sang in the Hobby Chor and played Schafkopf. Both he and his wife were long-time volunteers at St. Joseph Hospital and Lancaster Regional Hospital. He was a graduate of Reading Central Catholic High School where he was a standout in track and baseball.

Robert was a veteran of the US Army, serving as a Corporal during the Korean War in Medical Corps in Tokyo.

He is survived by his children: Robert F., Jr. married to Diana Borst of Lancaster, John W. married to Carol Borst of Strasburg, and Kathleen B. Green of Strasburg; his six grandchildren Elizabeth, Pamela, Steven, Julianne, Elise, and Jacob, and by his 9 great grandchildren. He was preceded in death by his brothers Paul, Charles, and William Borst, and his sister, Ida Borst.

Friends will be received by Robert’s family at St. Anthony of Padua Catholic Church, 501 E. Orange St., Lancaster, PA on Friday, June 24, 2022 from 10-11AM, with the Mass of Christian Burial to be celebrated at 11AM. Interment will be private. In lieu of flowers, contributions may be made in Robert’s memory to the St. Annes Retirement Community Giving, 3952 Columbia Ave., Columbia, PA 17512.

Uncle Bob, I know your in a better place with aunt Alice, watch over your family together and keep them safe. Love you, sad we didn’t get to spend more time together. Rest in peace 🕊️❤️❤️ prayers to your family ❣️🙏Kimberly Brambilla

My condolences to the family.RIP Bob. Mark Myers

So sorry to hear about Bob! A friend and a hard worker at K of C 867! Prayers for Bob and his family!
Rob Eckenrode