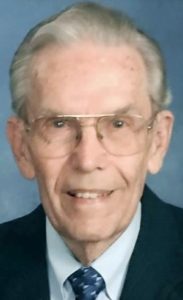 Robert E. Reed, age 88, entered heaven on Wednesday, August 23, 2017 after a long illness. He would have celebrated a 66th wedding anniversary with his wife, Ellen E. Reed, on September 1. He was born in Durant, Oklahoma to the late Madrid and Ruby (Weddington) Reed. Loved and respected by all who knew him, he will truly be missed by his family.
Employed as an engineering leader and manager at RCA which later became General Electric, and Burle Industries, Bob was responsible for the design of unique super power tubes, including a couple of patents to his name. He was involved in the design of the secret “Star Wars” missile defense system in the 1980s and developed a tube that was used in AWACS systems in military surveillance aircraft. He received a Bachelor’s degree in Electrical Engineering from the University of Oklahoma in Norman, Oklahoma and a Master’s degree in Physics from Franklin and Marshall College in Lancaster. He was a member of two honorary societies: Sigma Pi Sigma for physics and Eta Kappa Nu for engineering. He was beloved by his coworkers.
After retirement, he obtained his real estate license and worked with his wife at Ellen Reed Realtor.
Active in his church, he sang in the choir and taught adult Sunday School classes for many years. He was a faithful and devoted member of Covenant United Methodist Church, and more recently, Highland Presbyterian Church. He was active in his grandchildren’s lives as they grew up, and cherished the family’s dogs over the years.
Bob is survived by his wife, Ellen, and his daughter, Virginia (Giny), wife of Robert Mackey of Lancaster, and his three grandchildren: Philip Mackey of Baltimore, MD; Jason Mackey of Lancaster, and Alison, wife of Tyler Gillmen of Hershey.
Friends will be received on Saturday, September 16, 2017 from 10-11AM at Highland Presbyterian Church, 500 E. Roseville Rd., Lancaster, PA 17601, with the Memorial Service to follow at 11AM. Interment will be private.
Memorial contributions may be made to Hospice & Community Care, 685 Good Drive, Box 4125, Lancaster, PA 17604-4125 or Highland Presbyterian Church at the above address.

Dear Ellen,
My sincere condolences to you and your family. I often think of Bob and you and your enthusiam for learning. Bob’s letter to his mother and her response were endearing and memorable. I remember his kind, gracious soul and wonderful exuberance.
You and he spent many wonderful years together and I hope this difficult time is soon replaced by peace and love.
Fondly,
Pattie (Gunnet) Heaton

To Ellen and the Reed Family:
I want to express my sincere sympathy on the loss of your beloved husband, and family member. I knew Bob for quite a few years while at RCA, and Burle. He was an excellent Engineer,Manager, and generally an exceptional human being, and a true gentleman, I always enjoyed rounds of golf with Bob, and our colleague Ed Vresilovic. We often met for golf at the Host Farm, and Overlook. Bob was a wonderful,  gracious man, and I’m sure he will be welcomed into the company of The Lord. Rest In Peace Bob!
Chas. Tomasetti