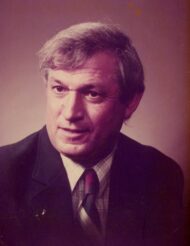 Richard K. “Dick” Finkbiner, our loving husband, father, granddad and Poppy, passed away on Friday, July 22, 2022, at the Mennonite Home Communities in Lancaster, following a brief illness. Born in Phoenixville, he was the son of the late Jacob and Elizabeth (Keane) Finkbiner. Dick was the loving husband of Mary Ann (Andrews) Finkbiner, and they celebrated their 66th wedding anniversary this past March.

Dick began working as a draftsman in the Pottstown office of Bethlehem Steel until its closing. He then worked for High Steel Structures in Lancaster for several years. He and his partner, Fred Gascho, later began their own business known as Lanco Drafting, from where Dick retired in 1999 after 25 years of service. Dick was always very active, and enjoyed playing golf, tennis, racquetball, and skiing. He was also an avid reader. He will be sadly missed by all who knew him.

Along with his wife, Mary Ann, whom he adored and loved very much, Dick is survived by two sons, Douglas Finkbiner and his wife Diane (Eckman), and Kenneth Finkbiner, 8 grandchildren, 9 great-grandchildren, and 1 step-grandson; all of whom he loved very much and was always happy when they came to visit. Also surviving is a brother, Thomas Finkbiner and his wife Debbie and a sister, Faye Rigg and her husband Rob, and many nieces and nephews. Along with his parents, he was preceded in death by his son, James Finkbiner in 2009, and a brother, Harry Finkbiner.

The family would like to express their sincere gratitude to the staff on the Trout Run 4th Floor at the Mennonite Homes for the loving care given to Dick in the months that he was a patient there.

Services will be private at the convenience of the family. In lieu of flowers, contributions in Dick’s memory may be offered to the Alzheimer’s Association at www.act.alz.org.

We had fond memories of Uncle Dick growing up. This saddened my heart finding out of his passing—much love and prayers to his family.