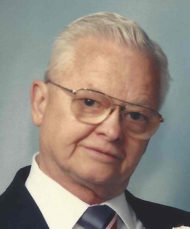 Richard Daniel Yeagley, 92, of Lancaster, PA, passed away Sunday, January 21, 2018, at Moravian Manor. Born in Lebanon, Richard was the son of the late Charles P. and Myrl (Weaver) Yeagley. He was the loving husband of the late Isabelle M. (Wasson) Yeagley, who died in 2014.

Richard proudly served his country in the US Army during World War II. He graduated from Penn State University as an engineer. Richard worked as a tool & die maker; he greatly enjoyed working with his hands. With a full workshop in his basement, he built his own biplane, a Christen Eagle, which he successfully flew. A true aviator, Richard routinely flew cross country in a 4-seat Piper and even flew to the North Pole twice. In addition to his biplane, he also built an MG car and a fully functional model of a Merlin engine that was built to scale.

Memorial services for Richard will be private and at the convenience of the family. In lieu of flowers, the family requests that donations in Richard’s memory be made to Masonic Village Hospice, 1 Masonic Drive, Elizabethtown, Pennsylvania, 17022.

I was so sorry to hear of Dick’s passing. My dad was particularly upset as Dick was probably his closest and longest living friend since they grew up together. Although both my parents are moving slower they would like to attend the service if at all possible. Sincerely, Eileen Close, daughter of Herm and Lillian Anspach 717-873-7342 or eileen@declose.com