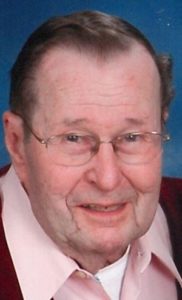 Raymond D. Ralston, 83, of Lititz, went home to be with the Lord, surrounded by his family on Thursday, August 10, 2017. He was the loving husband of the late Marilyn Joan Ralston, with whom he shared 58 years of marriage. Born in Philadelphia, he was the son of the late John N. and Helen Schultz Ralston. He was a graduate of Darby High School and a graduate of Temple University, where he earned a degree in Technology which included radio, television and electronics. Ray also served in the US Army as a Specialist Fourth Class, being discharged in 1962.
Ray was a devoted husband and father as well as a source of quiet strength for his family. Ray was always organized, hardworking and the ultimate provider. A career employee for over 30 years, Ray worked for the Bell Telephone Company and AT&T as a PBX repairman and supervisor. He also served as union president of the Communication Workers of America CWA).
Ray was a member of St. Peter’s Evangelical Lutheran Church. He raised his family in Havertown PA, and served as Scoutmaster for Boy Scout Troop 156 in Oakmont, PA. Ray loved all types of watersports including SCUBA diving, water skiing and high diving including a high dive feature at the famous Steel Pier in Atlantic City. Ray was a Certified Water Safety Instructor and a certified SCUBA diver. He also enjoyed boating, first building his own boat in West Wildwood and later spending time with family and friends on the “Rainboat” at Laurel Lake NJ. He enjoyed bird watching and forever battled the squirrels in an effort to keep them away from his bird feeders. He loved spending time with his cats: Max and Maize.
Ray is survived by his children: Jan (Ralston) Frailey companion of Michael Kowalick of Lancaster and Jeffrey married to Rebecca (Pawling) Ralston of Telford, PA, his grandchildren Kristi Frailey-Merritt, married to Michael Merritt of Conestoga, Timothy Frailey of Mount Joy and Sarah Ralston of Telford. Ray is also survived by his brother, Robert married to Regina Ralston of Ocean City, NJ, and several nieces and nephews. He was preceded in death by his son, Jon E. Ralston.
Friends will be received on Sunday, August 13, 2017 at St. Peter’s Evangelical Lutheran Church, 10 Delp Rd., Lancaster, PA 17601 from 1:30-2PM, with the Memorial Service to follow at 2PM. Interment will be private. In lieu of flowers, please make contributions in Ray’s memory to St. Peter’s Lutheran Church at the above address.

We are so sorry to hear of Ray’s passing. He was a “source of quiet strength”.  Joan had hosted our Prayer Chain book study luncheons at their house and she would always give thanks for him.  I picture him sitting there at the table with a grin on his face.  He will be missed.
With love and sympathy,
Mark & Angela Moshos, members of St. Peter’s