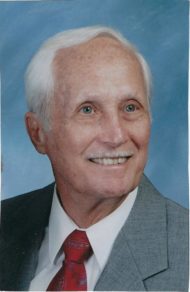 Paul D. Reitz, 93, formerly of Smoketown, died peacefully at his home at Brethren Village on Saturday, August 25, 2018. He was the husband of Margaret (Benner) Reitz for over 68 years.

A graduate of the former East Lampeter High School, Paul farmed for many years. Paul was a Licensed Realtor with Towne & County Realty and enjoyed renovating homes. He and Margaret operated a Bed & Breakfast in Smoketown for many years.

He was a long-time member of the former Paradise Mennonite Church, where he had served as a Deacon and a Trustee.

Born in East Lampeter Township, he was the son of the late Harry W. and Elizabeth (Diffenbach) Reitz. In addition to Margaret, he is survived by a son, Kenneth married to Carol Reitz of New Providence; two daughters, Jeanette married to Christopher Felix of New York City and Elizabeth married to Blair Carlson of Minneapolis, MN; four grandchildren, Melissa married to Philip Weaver, Megan and Eleanor Carlson and Shawn Felix; two great-grandchildren, Ryan and Nathan Weaver; and two brothers, H. Weaver Reitz of Willow Street and Clair Reitz of Gainesville, FL. He was preceded in death by a brother, Leroy Reitz and a sister, Miriam Reitz. He was dedicated to his family and was loved and respected by all.

I was saddened to read about the loss of Mr. Reitz. It was my pleasure to have cared for him. He was always so pleasant and he always talked Penn State football with me! He will be missed. May God bless you as you grieve this loss.
Stephanie Mackey MD

Margaret and family.
I am saddened to learn of Paul’s passing. May you find comfort and healing knowing that Paul touched so many lives. I fondly remember our time together when he assisted at the funeral home., and his stories of the guest house in Smoketown.
Fred Didyoung