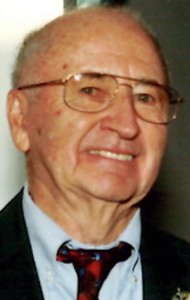 Paul C. Warwood, 90 of Lancaster passed away Sunday, October 19, 2014 at Oak Leaf Manor in Landisville. Born in Cleveland, OH he was the son of the late Paul and Della (Whitehall) Warwood.
He was a graduate of the former Millersville State College where he received his Bachelor’s degree in Education. Paul began his teaching career in a one room school house in Whitehorse, PA and went onto teach at Manheim Twp. School district for over 30 years.
Paul proudly served his country in the US Navy Air Corps in the Pacific theater during WWII.
He was an avid biker and at the age of 55 rode his bike across America. He also was an avid outdoorsman and enjoyed fishing, hunting and going to his camp in Huntington Co. Paul was a member of the Lancaster Bike club.
He is survived by the mother of his children, Thelma Barrett and her children: Glenn B. Warwood, of Lancaster, Ann L. Warwood, of Willow Street, Craig W. Warwood, husband of Kathryne, of Millersville, John R. Warwood, husband of Deborah, of Shade Gap, PA, Elizabeth L. Warwood, of Lancaster, and Martha Wade, of Havre De Grace, MD. Also surviving are nine grandchildren and sixteen great-grandchildren. He was preceded in death by his uncle, Clifford Warwood and son-in-law, Ed Wade.
A Memorial Service will be held at 11AM on Friday, October 24, 2014 at the Charles F. Snyder Funeral Home & Crematory, 441 N. George St, Millersville, PA 17551. Friends will be received one hour prior to the service at the funeral home on Friday. Interment will be private and at the convenience of the family. In lieu of flowers, contributions in Paul’s memory may be made to the Wounded Warrior Project, 4899 Belfort Rd, Suite 300 Jacksonville, FL 32256.

I had the joy of working with Paul Warwood at Manheim Twp. School District in the early ’60s. Please accept my sincee condolences. Sincerely, Dr. Ronald Wallace, Jocobus, PA

Sending my sincere condolences to you all at this time. I have fond memories of your father. I would run into him over the years at Herr’s and his eyes would light up and he’d get a big smile on his face as we talked about Glenn (jr.) and he’d tell me what a nice young man he is. We also chatted about Weston a few times, which would produce that same proud expression on his face. I was sad to hear about his decline over the past few years. I will remember him with that carton of ice cream in his bag, getting into his pick up truck, leaving with a smile and a wave.
Peace,
Susan Ciccone Becker