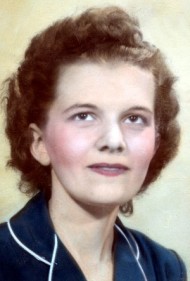 Patricia was a piece worker at Bulova Technologies for 30 years, and afterward was a banquet server at Willow Valley for 13 years. She enjoyed taking walks and being outside, reading, and spending time with her family.

Patricia is survived by her daughter, Deborah L., wife of Michael Gerber, of Lancaster, granddaughters, Samara, wife of T. Daniel Richards, of Lancaster, and Kacie Gerber of Lancaster, great-grandchildren, Bryson and Aliera Richards, Kylie Gerber, and Jionni Smith. One of sixteen children, she is survived by her brother, Roger Floyd, husband of Myrtle, of Lititz. She was preceded in death by her grandson, Troy Irwin, daughter, Vicky Waughtel, and fourteen brothers and sisters.

A viewing will be held at Charles F. Snyder Funeral Home & Crematory, 414 E. King St., Lancaster, PA on Saturday, March 26, 2016 from 11 AM until 12 PM, followed by funeral services at 12:00. Interment will be in Millersville Mennonite Cemetery.