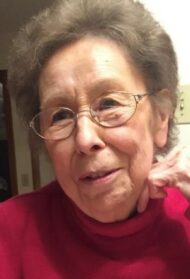 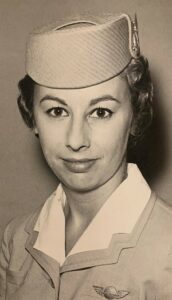 Patricia Ann Kubic, of Lancaster, PA, loving mother, grandmother, and great-grandmother, transitioned on December 19, 2021, at the age of 83. A highly independent, intellectual, and spiritual individual, it was not coincidental that Pat chose to depart this earthly plane on a night when a full moon filled the sky (symbolizing completion and transformation).

Born at DeGraff Memorial Hospital in Niagara County, New York to Benjamin and Valentina “Violet” Hyland (nee Nepokroeff), Pat developed her independence and sense of adventure at an early age by cultivating a love of reading and an imagination that took her to far off places. She sustained her passion for reading throughout her entire life, regularly consuming multiple books each week.

At a time when significant barriers to career opportunities existed for women, Pat deferred the convention of marriage and motherhood to chase her own dreams. Following graduation from North Tonawanda High School, she was accepted into the Grace Downs Air Career School, a rigorous New York City academy that prepared young women from around the world to compete for exclusive stewardess (now flight attendant) positions, a profession marked by prestige and status at the time.

Living in Manhattan (across the street from Central Park), Pat began exploring the world beyond societally imposed boundaries while studying for a grueling exam on plane equipment, safety protocols, and hospitality. After passing the exam, Pat was selected by Capital Airlines to receive continued training in Washington, D.C. where she was awarded her wings. During the Golden Age of flight of the late 1950s and early 1960s, Pat traveled throughout the United States. She also enjoyed the perks of her position by vacationing with her parents in several destinations abroad before returning to North Tonawanda to start and raise a family.

In 1979, Pat’s family and she moved to Lancaster, Pennsylvania. Over the next two decades, she used her experiences and skills to advance opportunity from within the Commonwealth of Pennsylvania’s Departments of Public Welfare and Unemployment. In various positions, she contributed toward helping countless others obtain energy for their homes, childcare for their children, and transportation, clothing, and other resources for their pursuit of job opportunities. In 1994, after the sudden loss of her daughter Michele (due to complications with muscular dystrophy), Pat found renewed purpose advocating for individuals with disabilities to obtain Social Security Disability Benefits.

In her retirement, she most enjoyed monthly lunch and dinner dates with friends, watching live theater, growing gardens, eating chocolate, playing games on her computer, spending time with her family, and contributing to causes for which she most cared. In the last years of her life, her daughter, Carolyn, ensured Pat’s independence was preserved in her own home until her final days.

Pat’s life, her work, and her family are all examples that one can make opportunities in this world, especially in areas of adversity. Pat believed strongly that life’s tests prepare us all to rise to a higher level of understanding for what lies ahead. She would take great joy knowing that she has served as an inspiration for others to chase after their own dreams and to help others do the same.

In Pat’s memory, consider making donations to transform the lives of people living with muscular dystrophy (a cause near and dear to her heart): www.mda.org or Muscular Dystrophy Association, WEB P.O. Box 97075, Washington, D.C., 20090-7075.

nathan and carolyn, with deepest regrets on the passing of your grandmother,mother. She certainly had a lot of talents. Still have memories of some of the good times, she will be in our prayer, love to all, pat and dick pochep

Lyn, my deepest sympathies to you and your family on the passing of your mother. She was a very special person. Time will heal the loss, but her legacy will live forever in your memories.
Clair Kreider
UGI retiree

Sorry for your lost. I worked with Pat at the CAO. She was always said hello and had a smile on her face when you talk to her. She was always kinds to her friends especially many who were very ill with cancer. I remember how she delivered a bouquet of flowers to her friend Sue to help lift her spirits. Full of grace and kinds.