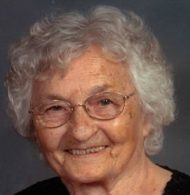 Nora had worked at Kerr Glass Manufacturing for 20 years. After her retirement, she worked at Coleman’s Ice Cream.

Nora was a member of Grace Community Church.

She enjoyed sewing, cooking, and spending time with loved ones. Her family was her

greatest treasure. She will be fondly remembered as a loving caretaker.

Friends will be received by her family on Thursday, November 19, 2020 from 10-11AM at Charles F. Snyder Funeral Home & Crematory, 414 East King St., Lancaster, PA , with the Funeral Service to follow at 11AM. Masks will be required to be worn to enter the funeral home. Interment in Conestoga Memorial Park

Due to my health I am unable to attend my sister’s service. I will always keep her in my heart and prayers.
God rest her soul.
HT CLARE

I was very blessed to know Nora, we visited each other often and she loved my “baby” Bobby.  What a lovely lady, have missed her since I left where she was living but sent her many cards and searched for her through a neighbor who said she had moved away.  Please accept my deepest sympathy and know she deeply did care for family and friends.  God Bless each and everyone of you family members.   Helen Hasch

Nora was a beautiful person, and I am greatful for the time that I knew her. My thoughts are with you.
Cassie Braun