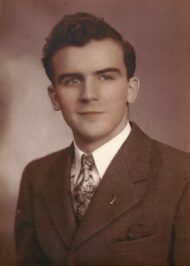 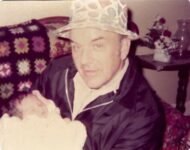 Nelson A. Lawrence, Sr., 96, of Lancaster, departed his earthly life on November 18, 2021. He was the husband of the late Naomi (Keen) Lawrence, celebrating 65 years of marriage in 2011. Born In Brickerville, PA, Nelson was the son of the late Irene V. (Shirk) Lawrence and Theodore Newton Lawrence. Nelson was the youngest of 5 Lawrence brothers: Tony (Joseph), John, Russell, infant brothers Kenneth and Harold, and a sister, Ruth (Boyer) Lawrence.

He was a graduate of Elizabethtown High School, and Stevens Trade School where he earned a trade in the auto mechanic field. After graduation, Nelson joined the Army on his 18th Birthday in 1943 taking the place of his brother, who would soon be expecting his first child. Nelson served with the PA 28th Division in the European Theatre during the Battle of The Bulge. While there, he Joined the 6 Man Singing Group “The Traveling Troubadours.” The group would entertain the troops at different checkpoints during the War. Wounded in battle and hospitalized in France and England, Nelson was awarded the Purple Heart.

After the War, Nelson went to work with his father at Rosie’s Auto Parts and later at his father’s auto business. In 1945, it was at Clark’s Diner across the street, that Nelson met a young waitress named Naomi, his future wife. In later years he worked at Olmstead Air Force Base and later for 27 years as a Postman in Lancaster.

Nelson loved his 7 plus small dogs over his lifetime, and fondly spoke of the dogs he had as a young boy. He faithfully listened to Rush Limbaugh for 30 plus years, was a diehard Phillies Fan, crazy about Jeff Gordon, favorite candy was Reese’s Peanut Buter Cups, loved getting together with his Kmart Cafe friends, loved to listen to and watch Irish singer Daniel O’Donnell, and most importantly he helped many people over the years!

Nelson always said that he wanted people to remember him this way, “I was here…I left…I hope I did some good!”

Surviving Nelson are his son, Nelson A. Lawrence, II and wife Ellen (Loechner) of Lancaster; daughters, Rebecca (Lawrence) Hanna, wife of David Hanna of Arizona, and Carol (Lawrence) Stigelman of Lancaster. In addition, he is also survived by 4 grandchildren, 9 great-grandchildren, and a great-great granddaughter. Nelson dearly loved his family.

In lieu of flowers, please send memorial contributions to The Humane League of Lancaster County, 2195 Lincoln Highway East, Lancaster, PA 17602 https://support.humanepa.org/ or to the Military Order of the Purple Heart, www.purpleheart.org/Donate

My sympathies Ellen & Nelson on the passing of your dad.