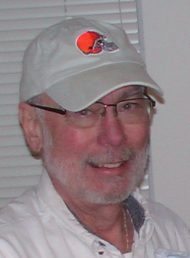 Morgan Keith Young, 70, of Landisville, died on January 24, 2017 at Lancaster Regional Hospital after losing his battle with a series of lingering illnesses. Born in Youngstown, Ohio, he was the son of the late Parley and Antonia (Vanaskey) Young. Morgan was the husband of Nancy I. (Schultz) Young.
A true polymath (Renaissance man), Morgan believed a man could “do all things, if he will.” From crafting a table and rebuilding an engine to piping mash potato rose petals over slices of beef Wellington and playing bagpipes, Morgan exemplified a dying breed of citizen that knew how (and when) to do just about anything. Even if the task was something he would eventually hire another to perform, Morgan took pride in understanding the concept, the history and the practical implications of any tool or technique he came upon.
Blessed with strong lungs and long legs, Morgan played tuba and ran track for Boardman High School. It was through his family’s refrigeration business, however, that Morgan began his love for learning and doing as much as he could absorb. Once tinkering with compressor units became “old hat,” Morgan turned to donning asbestos gloves and a safety mask in the foundries of Youngstown Steel. Morgan later graduated from Youngstown State University, and sought a career that would provide him exposure to a myriad of businesses, personalities and complexities, as well as sufficient time to focus on his numerous other passions, like Cleveland Browns football, toy trains, hunting, fishing and cooking. Morgan became an agent of the Internal Revenue Service in 1973 and retired in 2003. Morgan spent the last years of his life tinkering, building, cooking (though never cleaning…) and, from his recliner, making most Jeopardy contestants look like novices, as he mowed through any category with a seemingly endless supply of useless facts. Morgan could “do all things” (and he did them pretty darn well).
Surviving in addition to his wife, Nancy, are his children: Adrian Evan of Lititz, Nicholas Owen of Greenbelt, MD, Benjamin Rhys of Landisville, and Keith Morgan of Landisville, as well as three grandchildren: Olivia Jaclyn Young, Rowan Zachary Young and Cadence Elizabeth Young, all of Lititz.
Services will be held on Thursday, February 9, 2017 at the Charles F. Snyder Jr Funeral Home & Crematory, 3110 Lititz Pike, Lititz, PA at 7PM. In lieu of flowers, please make contributions in Morgan’s memory to the Lancaster County SPCA.

He also left behind 3 nephews from youngstown

The Young Family, We are sorry for your loss. May Memories of the Good Times spent together keep you going.
The Cole Family – Landisville

Mrs. Young, Ben, Keith, Nick, and Wendy
We are so sorry for your loss.  You are in our prayers,
The Sippel Family

Adrian, Julie, Livie, Ro Ro and Cadie,
We are so sorry for your loss.  You are in our prayers,
The Sippel Family

Adrian and Ben, I am sorry for your loss. It sounds like your dad was a great and unique person. My thoughts and prayers are with you. Mike Wildasin