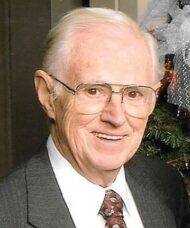 Milton L. Geiser, 92, of Mount Joy and formerly of Millersville, passed away at Lancaster General Hospital on Wednesday, August 18, 2021. Born in Liberty, Tioga County, he was the son of the late Carl J. and Lillian (Krotzer) Geiser.

Milt was a 1947 graduate of Lewisburg Area High School, where he enjoyed playing cornet in marching band. It was here that he met the love of his life, Mary Jane (Stimmel) Geiser. Milt shared 69 years of marriage with Mary Jane, and in recent years, was her devoted caregiver as she struggled with Alzheimer’s Disease.

Milt earned his bachelor’s degree in mechanical engineering from Bucknell University in 1951, and later earned his Professional Engineer license. During the Korean War, Milt worked on fighter plane engines for Curtiss-Wright Aircraft. After the family moved to Lancaster, he continued his career as an engineer at Armstrong and Kerr Glass, retiring in 1994. Milt worked on the research & development team that patented the first childproof bottle caps in the 1960s.

After retirement, Milt continued utilizing his design skills at home through building projects and home improvements. He enjoyed the challenge of designing and building something rather than buying it.

Some of Milt’s interests included music, old cars, reading, and attending concerts. He relished time spent with his grandchildren and tending to his garden. A real animal lover, he enjoyed the family’s cats and dogs. The Union County family cabin, built by his father in Bald Eagle State Forest, was his treasured place for frequent visits.

In addition to his wife Mary Jane, Milt is survived by three children: Jeffery W. Geiser, husband of Cathy (Weiss) of Mountville, John D. Geiser, husband of Robin M. (Mahosky) of Stevens, and Jennifer G. Haas, wife of Craig Haas of Mount Joy; 7 grandchildren: Joseph Geiser and John Geiser, both of Lancaster, Lydia Haas, Ethan Haas, and Noah Haas, all of Mount Joy, Brian Barnes, husband of Mary of Denver, and David Barnes of Millersville; as well as 5 great-grandsons: Tyler, Cole, Logan, Chase and Mason Barnes. Milt was preceded in death by his parents and his sister Naomi Freed of Lewisburg, wife of the late Bruce Freed.

A memorial Service will take place at 11:00 AM Tuesday, September 7, 2021, at Trinity Lutheran Church, 47 W. Main Street, Mount Joy, PA 17552, with The Rev. Matthew Pensinger officiating. Interment will be private.

Face masks are kindly requested for all funeral attendees.

In lieu of flowers, memorial contributions may be made to the Alzheimer’s Association, www.alz.org

Milton will be missed by many. He was an awesome husband,  father, grandfather,  father in law. He raised a great son. ( John )  Memories will be a lifetime. Rest in peace. God Bless.
Giesers, you certainly have an Angel over you all.
Renay Madl

Will always see your Dad tending to his yard in Millersville.   He was always welcoming and was a terrific neighbor.  Heaven’s gain is our loss.  Prayers for peace ❤️
George Simon