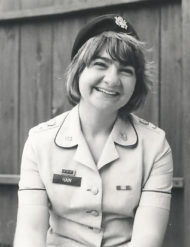 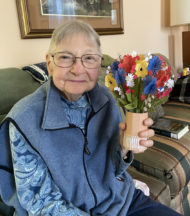 May was born on Palm Sunday, April 2, 1950, to James M. and Neeltje W. Hain. She grew up in Berks County, and later moved to New Hampshire, where she graduated from the High Mowing School, in Wilton, NH, in 1968.

May graduated in 1972 from Kutztown State College with a BA degree in Early Education and was commissioned a 2nd Lieutenant in the U.S Army Women’s Army Corps (WAC).

Assigned to Fort Bragg, NC, May served as a Personnel/Administrative Staff Officer, an Executive Officer, and later as the commander of the Fort Bragg WAC Company, a unit of some 800 women.

May & Bob were married at the Pope Airforce Base Chapel on August 2, 1975.

Service with the Pennsylvania Army National Guard Headquarters at Ft Indiantown Gap came next as she worked as an Equal Opportunity / Race Relations Officer and also worked as a manager of the Mill Bridge Village in Strasburg.

Throughout the years, at all the various duty stations, May made it her mission to help the families and the soldiers by volunteering with the Red Cross, Army Community Service, Officer’s Wives Clubs, and with the unit Family Support Groups. These groups were vital to support the troops deploying on Operation Desert Storm in 1990. May was the best and most supportive Army wife ever.

Retirement brought May back to Strasburg, the old house she so loved, and to her family. She became involved in community affairs, particularly in the historic community where she was a long-time member of the Strasburg Heritage Society, helped the Strasburg Architectural Review Board and later, Grave Concern. Her efforts assisted in the update of the borough Historic Ordnance, the update of the Strasburg region Comprehensive Plan, the designation of Route 741 as a state Historic Byway, and the reconstruction of the Edisonville bridge along that byway as a “contact sensitive” design. When she became aware of the extensive damage to a local 18th century cemetery, she took on the role of project manager to rebuild it, place the headstones in their original position, and make replacements for those damaged beyond repair.

She was keenly interested in the environment and water issues, where she assisted the U.S. Army Corps of Engineers with the delineation of wetlands in the borough and in the formal naming of an unidentified stream mentioned on 18th century maps to Kendig Run. May loved to read and knit and was an avid supporter of the Strasburg Heisler Library and formed a textile arts group part of the library activities to encourage local handworkers. Her knitting benefited cancer survivors and the mothers and babies of the local hospitals.

May is survived by her brother, James H.W. Hain of East Falmouth, MA, and her sister, Lysbeth W. Clark of New Providence, PA.

I am so sorry to hear of the passing of May Hain. My heartfelt condolences to her brother James, who I met a few years ago at a HMS alumni reunion, as well as to other members of her family. My mom, Mrs. Karl, sends her sympathies also.
Her mom was the weaving teacher and my mom the pottery teacher and the HMS campus was our home. I have fond memories of May and I hanging out a lot together, on the merry-go-round, for instance.
I just read her obituary and appreciate hearing about the rich life she led.
Sincerely,
Isabel Karl

May I’ll miss ya. Thanks for the memories.
Ray Simmons

A true friend. May’s thoughtfulness and cheery disposition always helped to better my day. May will forever hold a special place in my heart.
Karen Simmons

May was one of the kindest and best people I have ever met.  I loved to hear her voice.  The world is less without her.
Del Staecker

May was a wonderful spirit caring and loving of others! Her contributions to society at large are a grand example of her commitment to the betterment of others. I enjoyed my conversations with May and will miss seeing her around town. So sorry for her family and the community loss. May she rest in peace.
Tracy Leed