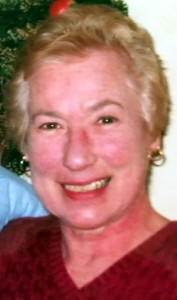 Mary Ann Walker, 74, of Lancaster, PA passed away August 31, 2015 at Lancaster General Hospital. She was the wife of Gordon P. Walker with whom she was married for 51 years.
Born in Detroit, MI she was the daughter of the late John and Eloise (Wilkins) Kaiser. Mary Ann received her secretarial degree from Westminster College and worked as a secretary for High Industries. Mary Ann loved sewing and doing alterations and was an impeccable homemaker. She was a selfless individual putting others needs before her own. She enjoyed her bridge club gang and was a member of the Gourmet Club and the Newcomers Club. Mary Ann was also a member of St. Peter’s Lutheran Church.
In addition to her husband she is survived by a daughter Amy wife of Arthur “Buddy” Brennan and a son Scott Walker and wife Bobbi both of Pittsburgh, PA; four grandchildren Ally and Luke Brennan and Joshua and Jake Walker; a brother and sister-in-law Clyde and Beverly Angle of Lancaster and sister-in-law Elaine Kaiser of Malvern, PA. Mary Ann was preceded in death by a brother John Kaiser.
Memorial services will be announced at a later date. Private family interment will be held in St. Peter’s Lutheran Church Cemetery, Lancaster, PA.
In lieu of flowers please consider a donation to St. Peter’s Lutheran Church, 10 Delp Rd. Lancaster, PA 17601.

Dear Gordon,Amy and Scott,
I’m sorry I was not able to attend the memorial services earlier today for one of the kindest neighbors and friends one could ask for.It is almost impossible to believe so many years have passed since those great Northbrook days we shared.My thoughts and prayers are with you all as you deal with your loss.
George Adams