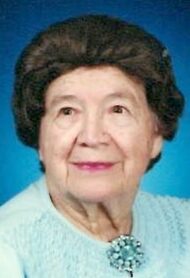 Marion A. Sable, age 101, of Lititz went home to Heaven on Friday Sept. 16, 2022. Born in Upper Darby, PA, she was the daughter of the late Ludwig and Maria (Petla) Moeslein; first generation immigrants to this country. She grew up in Drexel Hill, PA and later moved to Havertown after marriage. Marion was a proud graduate of Upper Darby High School and received a full scholarship to Arcadia University (formerly Beaver College) where she studied education and earned her teaching degree. Following graduation, she became a teacher and taught in Philadelphia area suburban schools. Her love of teaching children and reading books was a big part of her life, and in her later years she frequently volunteered in schools and libraries.

Marion married the love of her life, Henry S. Sable on June 17, 1944, who preceded her in death and whom she dearly missed. Both were devout Catholics and members of St. Denis Church in Havertown, where Marion raised her family and lived most of her life, until she moved to Lancaster just before her 80th birthday.

Marion was a devoted wife, mother, grandmother and great-grandmother, and faithfully remembered everyone’s birthday, anniversary and special occasion with cards which she was fond of sending. Marion also loved music and singing. She was an accomplished pianist, and was a member of the St. Denis Church choir for many years, until she moved to Lancaster, PA where she then joined the St. John Neuman Church choir. She loved playing cards, particularly Bridge, and traveling to many places in the United States and Europe with her husband. Most of all she was highly devoted to the Catholic faith and was a devout member of her church, where in addition to being a choir member, served on committees including the Bereavement Committee and the Annual Bazaar, where she made many friends. She also enjoyed living at Olde Hickory Apartments and had many friends there as well.

Due to several falls late in life, she eventually moved to Legend of Lititz personal care home in 2018, and she was always smiling, appreciative and kind to the staff there. The staff often remarked that she was one of their favorites. Although she greatly missed living at Old Hickory, and became wheelchair bound soon after moving to Legend, whenever asked how she was doing, her standard reply was “No Complaints.” She always expressed gratitude; the staff reported that she was always pleasant, uplifting and often had kind words and compliments for them. She was also very fond of candy and sweets, which everyone visiting her at Legend made sure to bring to her.

In lieu of flowers, donations may be made to Manheim Township Public Library, where Marion volunteered for several years and enjoyed reading many books.

To The Sable Family,
Please accept our sincere condolences on the loss of your Mother.  Our parents, Hank and Catherine were neighbors of your Mother’s  from Olde Hickory. They always spoke so fondly of her and how much they enjoyed having her as their neighbor. She would often ride with them to mass on Sunday mornings at St. John Neumann. May you find peace and comfort in the wonderful memories of your Mother in the days ahead.  Our thoughts and prayers are with your entire family.  May she Rest In Peace.
Sincerely,
The Ball Family

To the family of Marion Sable:
Please accept our sincere condolences on the loss of your mother.  Our parents, Catherine and Hank Ball were neighbors of your Mothers at Olde Hickory. They always spoke so fondly of her and how much they enjoyed having your Mother as their neighbor. She would often ride with them to mass on Sunday mornings at St. John Neumanns.  May you find peace and comfort in the wonderful memories of your Mother in the days ahead.  Our thoughts and prayers are with your entire family during this difficult time.  May your Mother Rest In Peace.
Sincerely,
The Ball Family