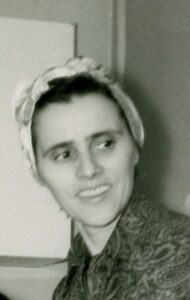 Maria Kovacs, 98, formerly of Lancaster, passed away peacefully early Friday, June 10, 2022, at St. Anne’s Retirement Community. Born in Orfalu, Hungary, she was the daughter of the late Louis and Maria (Bartikovics) Kovacs. Maria was the loving wife of the late Louis Kovacs, and they shared 61 years of marriage at the time of his passing in September, 2009.

Maria had seven brothers and sisters, one of whom is still surviving and residing in Holland. Maria & Louis were Hungarian citizens and residents of Hungary until their departure in 1956 during the Hungarian Revolution. Leaving all behind, other than their two small boys, they found their way to America and a new life. Throughout the many challenges of learning a new language and establishing a home, Maria remained steadfast in her faith and love of family. Maria was a loving wife, mother and grandmother. She was a devout Catholic and a member of St. Mary’s Catholic Church in Lancaster.

Maria is survived by her daughter, Anne Marie DiCarlo and her husband Benjamin of Lancaster, and her son, Louis Kovacs, Jr. of Riverside, CA. Also surviving are two grandchildren, Gina Marie and Benjamin Francis DiCarlo. She was preceded in death by her husband Louis and son, Francis S. Kovacs, a US marine killed in action during the Vietnam War in 1969.

Mass of Christian Burial will take place on Thursday, June 16th, at 10:00 AM from Saint Mary’s Catholic Church, 119 South Prince Street, Lancaster, PA 17603 with Father Brian Olkowski as Celebrant and Fr. Bernardo Pistone as Co-celebrant, where the family will receive guests beginning at 9:00 AM. Interment will follow at Resurrection Cemetery, 5201 Hulmeville Rd. Bensalem, PA 19020. Memorial contributions may be made to the Saint Thomas More Society or EWTN.

Maria was so adorable and sweet. She was always full of energy god bless.
Brittney