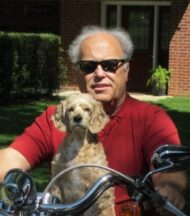 Kevin E. Landis, 63, of East Hempfield Township, passed away on Saturday, July 16, 2022, at the Lancaster General Hospital due to complications from an ailment during his extended battle with Multiple Myeloma. Born in Lancaster, he was the son of the late Stanley and Maureen (McFadden) Landis.

Kevin graduated from J.P. McCaskey High School with the Class of 1976. He then served with the US Army and the Army Reserve. Kevin established and operated his first company, Landis Neon Signs. His talent can still be seen throughout the county, from small neon signs in the glass windows of car dealerships to large canopy and vinyl signs at Park City Mall. For the past 17 years, Kevin was the owner and operator of Landis Equipment. He was very interested in history. Kevin was the founder of Lancaster, PA in Photos and Videos Facebook group. He enjoyed riding his Harley and spending time with his children. Kevin’s generosity was unmatched. His ability to teach, inform, and guide others was distinctive. Describing Kevin within the confines of an obituary is quite literally impossible to do. The world will never again know a man like Kevin Landis.

A loving father and grandfather, Kevin is survived by four children: Karen Landis of Florida; Judy Kopanski and her husband Michael of Morgantown; Susan Layton and her husband Richard of Lancaster; Allen Landis and his wife Taylor of Lancaster; and his 7 grandchildren. Also surviving is his brother, Stanley Landis, and two sisters, Kathy A. Landis and Eileen Landis. Kevin will be especially missed by his special canine companions, Jenny and Earl. Along with his parents, he was preceded in death by a brother, Brendan Landis.

A Celebration of Life service will be held at 2 PM on Monday, July 25, 2022, at the Charles F. Snyder Funeral Home & Crematory, 441 North George Street, Millersville, PA 17551, where the family will receive guests at a viewing beginning at 12 PM. Interment will follow at the Rohrerstown Lutheran & Reformed Cemetery.

What a beautiful tribute. Brought back some sweet memories.

My deepest condolences to Kevin’s family, children & grandchildren.  I’ve known Kevin for 40 years.  His patriotism, entrepreneurial spirit, engineering mind, love of family, quick wit & sense of humor, will always be remembered.  The Nova Crew has been sharing memories, fun stories and tears, reminiscing about Kevin all week.  He leaves behind a legacy of “Kevisms” we’ll cherish for many years to come.  Rest easy brother. Respectfully,  Karen Mead

So sad to hear this news.  He was the king of neon.  Please know my sympathies are with you and his family.
Chuck Colson
McCaskey Class of 76

Thoughts and prayers for the family.   He was a friend to many and one of a kind.   Fly high and soar my friend…run those gold roads in the wagon.
CHERYL M

I am so sorry to hear of Kevin’s passing.
I’ve known Kevin for over 40 years, since the early neon days. Prayers to the Landis Family.
Sincerely, Joe Gargano

So sorry for your loss. Kevin’s kindness to my family is forever in my heart. I love you Jenny and earl. My prayers are with you all
Sincerely,
Jacqueline Young

Kevin was such a kind soul to my husband and I. We never felt like tenents, but part of the family. I think only because he enjoyed my cooking. Thoughts and prayers to the Landis family, and poor Jenny and Earl.