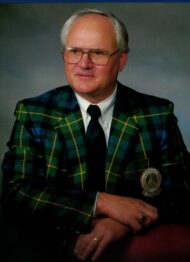 Joseph G. Baidy, 82, of Lititz, passed away Friday, May 6, 2022. Born in Williamsport, he was the son of the late Stephen and Agnes (Tluzcek) Baidy. Joe graduated from Williamsport High School and joined the Marine Corps, being deployed with the 3rd Force Recon Battalion (Special Forces) FMF.

After his tour of duty, Joes was offered a golf scholarship to Penn State University. Golf was always a love for him, as his four brothers excelled in all the other sports. During High School, he was the District 4 Champion, Junior Chamber of Commerce Champion leading him to finish second in the PA State. He went on to play in the International JCC, where he placed 17th in the world. Joe held many local and regional titles.

During the latter part of his career, Joe was an Agronomist and he worked with outstanding architects on seven courses, notably, Jack Nicklaus (2 courses in Russia), Arnold Palmer, Robert Trent Jones, Jr., Tom Fazio and others.

He was preceded in death by his brothers, Francis, Stephen, and Paul, and his son Michael. Joe was the beloved husband of Judith A. (Letteer), and they just celebrated their 57th wedding anniversary. Joe was the devoted father of Michelle M. Baidy and grandfather of Charles Joseph Baidy. He is survived by his brother Robert Baidy.

Joe was a parishioner at St. John Neumann Catholic Church, and he was a 4th Degree Knight of Knights of Columbus St. John Neumann Council #12532. He previously was a member of St. Joseph the Worker Roman Catholic Parish (formerly Annunciation) in Williamsport.

He served as director of many associations and service organizations, including Lions International and Cuyahoga County for the Disabled.

Joe and Judy were pleased to be able to travel to over 55 other countries during their marriage.

The family extends a special thanks for all those involved in his care, especially Kindred Hospice and Continuous Home Services, and Stephanie of Cardiac Consultants.

A viewing will take place 10 to 11 AM, followed by a Mass of Christian Burial at 11 AM with The Rev. Daniel F.X. Powell as Celebrant, on Wednesday, May 11, 2022, at St. John Neumann Catholic Church. Cremation will follow, and private inurnment will take place in Wildwood Cemetery, Williamsport, PA.

In lieu of flowers, contributions may be made to St. John Neumann Catholic Church, 601 E. Delp Road, Lancaster, PA 17601.

Joseph G. Baidy was a caring neighbor.  Joe was a kind man wanting to help or share. I miss our talks at the mailbox.
RIP Joe ✝️

Dear Judy, Michelle, please accept my deepest condolences. Joe was an exeptional person, one of the kindest man I have ever been happy to know and work with. He was my first teacher in greenkeeping and moreover my beloved Friend. I will never forget what he had done for me and my family. Rest In Peace, my dear friend. You will be missed

Judy and Michelle so sorry to hear of Joe’s passing.  God bless your family.  Your in our prayers. Love, Annette Roda

The laughter, love and the discussions of life Joe and his family shared were priceless. He had a way to make you feel good about yourself and was loyal to all he got close to.   Joe you taught us well, my family loves you and thanks you for who you are and what you taught us.   May now you Rest In Peace my friend.   You will never be forgotten as the memories will live on -love you Pop pop-Love Shawn, Susan and Sammie

May God lead him to life everlasting!  A good man who always made me smile!  Rest In Peace Joe!  Angela Richards