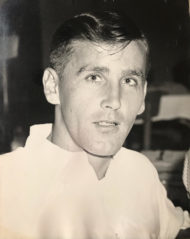 He had most recently been a resident of Moravian Manor, Lititz, PA.
Before retiring in 1998, Joe had worked for General Motors for 46 years in the Philadelphia area. A proud member of the UAW union, and very dedicated employee, Joe never missed a day of work during his entire tenure with GM.

He was the proud father of his only daughter Denyse A. Kling, Lititz and his grand-daughter, Cassidy Anne. Joe is also survived by four sisters, Joan, Patricia, Catherine and Cecelia and a brother, William, many nieces and nephews as well as many grand-nieces and grand-nephews all in the suburban Philadelphia area.
He was preceded in death by several brothers and a sister.

A celebration of life will be held at a later date in the Philadelphia area.
In keeping with Joe’s spirit of humbleness and generosity, please consider donating to Roman Catholic High School, 301 North Broad St., Philadelphia, PA 19107 or a donation in his name to a charity of your choice.