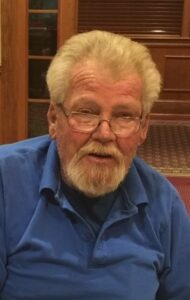 John R. “Jack” Kyle, 78, of Elizabeth Township, passed away at Lancaster General Hospital on Sunday, April 3, 2022. He was born in Roanoke, Virginia, the son of the late William I.D. and Maryjane (Radcliffe) Kyle.

Jack shared 38 years of marriage with his wife Sheila A. (Dowdall) Kyle. He was a long-haul truck driver for over 30 years, both for himself and for various companies. On several trips across country Sheila rode along with Jack in his Peterbilt truck. Jack’s handle was “Partly Cloudy,” and Sheila’s was “Sunshine.”

He attended Coleman Memorial Chapel with Sheila. They enjoyed Caribbean cruises, and vacationing at the Outer Banks Beaches, where Jack would body surf with son John. Jack took pride in weeding his garden, he drank coffee all day every day, cheered for the Eagles, and always had time to play with his dogs Abigail and Rusty.

Achieving 36 years of sobriety, Jack was regularly active with Alcoholics Anonymous and the 521 Club, where he loved to help people recover sharing his experience over a good card game.

In addition to his wife Sheila, Jack is survived by daughter Katina L., wife of Zachary Barton of Lancaster, son John Sample, husband of Amber of Landisville, five grandchildren, and two nieces. Jack was preceded in death by his sister Lynn Harter.

So very sorry to have lost another friend