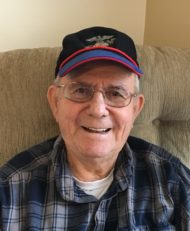 Born in Curwensville, PA on Aug. 24, 1924, John resided at the Clearfield Home until age 6. He was then raised at Girard College in Philadelphia. There he formed lifelong bonds with his many “Girard Brothers.” Following graduation from Girard, John enlisted in the Marines on his 18th birthday. He served during WWII primarily at Pearl Harbor, where he learned and then taught Japanese to fellow Marines. One of his duties was to attempt to intercept radio messages from Japanese transmissions.

John used the GI bill to attend West Chester State College. It was there that he met the love of his life, his “little co-ed” Jean Kuehner. They married in 1950, two weeks after graduation. They raised their family in the Cobalt Ridge section of Levittown, PA. John was a teacher, guidance counselor, and coach with Pennsbury Schools. For three summers John and Jean both worked as recreation directors at Pocono Plateau. It was then that they discovered Lake Jamie just a mile down the road. They spent many years building their dream vacation cabin and they eventually retired there in 1984. They became involved in the community. John was on the Barrett Township Library Board, he founded the Lake Jamie Property Owners Association, and sang in the Mountainhome Methodist Church Choir. They spent many years enjoying the Poconos and traveling in their RV until they relocated to Brethren Village in Lititz.

John loved to read, recite poetry, sing, play his harmonica, travel, swim, and hunt. His gift of gab and his penchant for telling stories, often more than once, were legendary. John considered himself very fortunate to have had the advantages of growing up at Girard College. He wrote two books about his years there and his later life. He was proud to receive the Girard College Alumni Scholar Athlete Award.

His long and full life focused on his loved ones and he was totally involved in their lives. He showered all of the love he did not have as a child onto his family. His three children were fortunate to have childhoods filled with Friday night winter family swims at the local middle school, regular trips to the library, nighttime Hide and Seek games with the Levittown neighborhood kids, Sunday afternoon outings at the archery course, listening to poetry around the table after dinner, camping in many of Pennsylvania’s state parks and gymnastic lessons on the backyard high bar. He was adored by his nine grandchildren who treasure memories of Grandpa playing games at the kitchen table, walks through the woods, and telling his many stories while playing the harmonica around the campfire. John was the ultimate family man.

He was the beloved and devoted husband of the late Jean (Kuehner) Anderson for 62 years. He is survived by his three children, daughter Susan Stetler (Richard) of Warrington, PA; son Dr. Patrick Anderson (Marian) of Pequea, PA; and son Michael Anderson (Cindy) of Denver, PA. He is also survived by 9 grandchildren, 7 great-grandchildren, one brother, as well as many nieces and nephews. John was predeceased by 16 siblings.

The family wishes to thank the incredible staff and caregivers at Brethren Village, who were so attentive to both John and Jean and made the final phase of their lives comfortable. We will be forever grateful for your kindness.

A memorial service will be held at a later date. In lieu of flowers, donations may be made to Pocono Plateau Camp & Retreat Center, 304 Pocono Plateau Rd, Cresco, Pa 18326. www.poconoplateau.org.

I extend my condolences to John’s three children and his entire extended family. John and I were friends and classmates at Girard College, where we first met as newbies nine decades ago.  We had many good times together, including summers at the Girard camp in the Poconos. My late wife and I enjoyed getting together with John and Jean at class reunions. We will be reunited soon.  Until then, I will revere John’s memory.
Ed Lipp

Very sorry to hear of his passing, I know that my late father Darryl enjoyed spending time with Mr Anderson and read at least one of his memoirs. I fondly remember Mr Anderson’s reaction to us having flown over to America from the U.K. in 1990 on Virgin Airlines, he found the name absolutely hilarious. What a long and amazing life he enjoyed. My thoughts are with the family. X
Martin Culpeck

A true Gentleman.
I last saw him in the flesh 30 years ago but I will never forget him.
Robin (UK)

Much has been said about the feats of the greatest generation. John managed one more: He passed them on.
For that, may he stand proud and tall.

I shall remember a very safe and cozy home in the Poconos, where my stay was too short. And to point gun and rifle only when and where you are prepared to deal with the consequences.
Frank (Germany)

My condolences and sympathy to the entire Anderson clan. Although now is a time of sadness, for mourning in our own ways, I am sure that we will soon  be smiling as we recall the memories that John gave us. I can hear his voice now, telling me about the location of the line between Pike county and Monroe county. I can see him in his Woolrich hunting coat waking with us to our spots on opening day of deer season.
The phrase “a gentleman and a Scholar” most aptly applies John. I am so grateful to have met and come to know him. God bless.
joe kambic

Your father, my Uncle John, was a wonderful man. He was caring, social and a great father. John and Jean were both family focused  and raised their kids the same.  The world needs more parents like them. You all were so close and I know the whole clan will miss John a lot. I offer my deepest condolences. Rest in peace, Uncle John.
Richard Wagner

To the entire family,
My deepest condolences for the loss of Mr. Anderson.  So many fond memories of him, and your family growing up neighbors in Levittown, PA.  A good man and neighbor who lived a life of purpose.  May he rest in peace.
God Bless,   Debbie (McGarry) Stevenson

Hello Mike, Susan and Pat,
I’m so sorry to hear of the passing of your Dad, Mr Anderson. I hold such fond memories of your dad and my dad having “windy” conversations at the kitchen table over a cup of Sanka.  I remember, your Dads beautiful voice and how he was always a gentleman.  Rest In Peace Mr Anderson.     Barbara McGarry

Mrs Stetler, my condolences to you on the passing of your father .
Glenn Haas

You will miss him but be assured you will meet him in a better place. God be with you as you grieve the empty place his death leaves.
Kay Dale Bloom