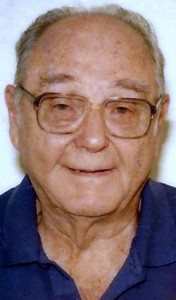 Born in Harrisburg on March 30, 1914, he was the husband of the late Wanda J. (Snyder) Renolle, and the son of the late Jennie (Renolle) Scott.

A descendant of the French Huguenots, John was employed as a machinist for RCA for 27 years until his retirement in 1976. He then worked for Weis Markets part time for another 27 years, retiring at age 90.
John was a 55-year member of Masonic Lodge #43 F&AM, Commandry 13-Knights Templar, a life member of Forest 27 Tall Cedars, Lebanon, a member of Church of Christ Disciples, Lancaster, and American Legion Post #34. He was a founding and honorary lifetime member member of Conestoga Country Club.

He enjoyed bowling and golfing, playing until he was 91. A deer and turkey hunter, he made his last trip to the mountains in 1994 at the age of 80. John was an avid Phillies fan.

He was an Army veteran of WWII.

A Funeral Service will be held at 10:30 AM Tuesday, July 1, 2014 at Charles F. Snyder Funeral Home & Crematory, 414 E. King St, Lancaster with Pastor John Jewers and Dr. Robert Metze officiating. Friends will be received at the funeral home one hour prior to the service. Burial will be private at the convenience of the family.

I was saddened to hear of Scotties passing. He was part of my childhood growing up because he and my dad were best friends. My dad and him had a hunting cabin in Potter county where they spent every hunting season.  He was always a nice man to my sister and I growing up. The last time I saw him was at my mom’s viewing in 2011.  We lost a good man.  Will always remember him!!   Wendy Smeltzer, Hallam, Pa.