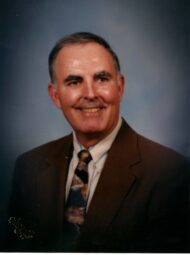 John E. Garry, 86, passed away on Wednesday, May 25, 2022, at Lancaster General Hospital. He was married to his wonderful wife Barbara Siderio Garry for 60 years. Born in Stamford, CT, he was the son of the late Thomas M. and Laura Ellis Garry. He graduated from Saint Mary’s High School in New Haven, CT, and Villanova University, Villanova, PA.

John was a veteran of the U.S. Army, He proudly served his country for three years and was stationed in both South Korea and Fort Polk, LA.

John started his career in banking with Conestoga National Bank in 1961. In 1987, he joined Fulton Bank and retired from Fulton Financial Advisors in 2001 as a Vice President and Tax Manager.

After retirement, John worked at the Manheim Auto Auction for three years and served as a volunteer for Meals on Wheels for ten years. John played baseball, softball, tennis, and golf throughout his life.

John and Barbara enjoyed traveling to Ireland, England, and Italy. They also had a wonderful trip to the Western United States visiting many of the beautiful National Parks.

A Mass of Christian Burial will be held on Friday, June 3, 2022, at 10:30 AM at St. John Neumann Catholic Church, 601 E. Delp Road, Lancaster, PA 17601, with The Rev. Daniel F.X. Powell as Celebrant. Family and friends will be received one hour prior to Mass at the church. Private inurnment will be in St Joseph New Catholic Cemetery.

My condolences for your loss of John. I know you’ve been through tough times lately. I know the loss of a spouse brings difficult times. I will be returning from Florida on 6/22 but I like the Water Street Mission as a worthy charity to remember John. I will continue contributing in his honor.
Thinking of you & will stop by to see you when I get home.
Ron Ford

“What we have once enjoyed we can never lose. All that we love becomes a part of us.” – Helen Keller
John was a gracious person with a great sense of humor. I enjoyed talking politics with him and going down memory lane as our families intertwined throughout generations. He and Barb were also great dog sitters for our Rocky, they took care of him so well, when we’d come to pick him up, he was never ready to leave, John would say it was his it was his home away from home. My deepest sympathies to Barb and the entire family
Tina Bellanca