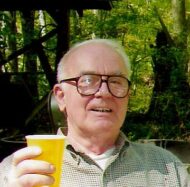 John B. “Bud” Witmyer, 90, of Lititz, passed away at United Zion Retirement Community on Monday, June 13, 2022. Born in Lancaster, he was the son of the late John S. and Janet (Urey) Witmyer.

John worked for Strawbridge & Clothier for 40 years until his retirement. Through his job he was able to travel internationally. He served in the US Army during the Korean War. He went to Art School in Philadelphia and had a lifelong passion and appreciation for art. He also enjoyed spending time with his dogs as well as gardening and nature.

John is survived by his sister, Barbara Hamaker; his sister-in-law, Sandra Witmyer; and his nieces and nephews, Brian Witmyer (wife, Sue), Robin Herzog (husband, Randy), Nanette McCord, Daniel Witmyer (wife, Paige), Susan Munn (husband, Matt), and Lisa Lewis (husband, Bob); as well as many great nieces and great nephews. In addition to his parents, he is preceded in death by his brother, James Witmyer and sister, Linda Slacum.

Services are Private and at the convenience of the family. In lieu of flowers, donations can be made to the Pennsylvania SPCA Lancaster Center at www.pspca.org or 848 S Prince Street, Lancaster, PA 17603.