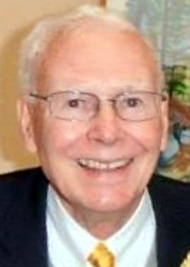 John Andrew (“Jerry”) Walsh III, of Brethren Village, Lititz, PA, died peacefully on April 7, 2020, five days before his 92nd birthday. The son of John Andrew Walsh, Jr., and Molly Hart Walsh, Jerry grew up in Lowell, MA, and upon graduating from Lowell High School joined the Navy in May, 1945, going to flight school. Once the war ended, the Navy sent him to college, first at St. Lawrence College, and ultimately at Union College, Schenectady, NY, where he graduated. After graduation in 1950, he joined AMICA Insurance, where he remained employed until he retired in 1993.

After spending his adult life in Upstate New York, he ultimately retired to Lancaster in 1997, first in Deer Ford, and then in Brethren Village. A devout Roman Catholic, he was a member of St. John Neumann Catholic Church. He was a proud volunteer at BookSavers in Ephrata, part of the Mennonite Central Community organization.

He married the love of his life, Martha Stevens, in 1951. He is predeceased by Martha, his daughter Mary Jane, his sister Katherine and his brother Joseph. He is survived by his children, Andrew (Lee), David (Beth), Susan Ober (Doug) and Sarah Dieter (widow of Bryan). He has eleven grandchildren, Caroline Walsh Murray (Bryan), Lindsay Walsh Summers (Andrew), Tim Walsh (Ruth), Sean Walsh, Daniel Walsh, Thomas Walsh, Douglas Ober, Claire Ober, Jed Ober, Max Dieter and Ellie Dieter, and six great-grandchildren, Nate and Brendan Murray, Madelyn and Emily Summers, and Eliana and Henry Walsh, who was born three days before Jerry’s death. He is survived by his sister-in-law, Carolyn Amstutz, her daughters Jennifer Amstutz and Elizabeth Munro and their husbands and children. He is also survived by his dear companion, Mary Ann Kimmel.

A memorial service will be held at a later time to be announced after the community is re-opened. In lieu of flowers, donations can be made to Peter’s Place in Radnor, PA or the Hospice and Community Care, Lancaster

i’m very sorry for your loss. jerry was a close friend to me as he was to mahlon risser. i’ll always remember him.
Adam Mertz