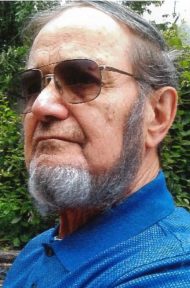 He is the son of the late Helen (Hassey) Gbur and George Gbur.

He graduated with a B.S. in Engineering from Youngstown State University in 1962 where he played football for YSU, was president of the student section of the American Society of Engineers, and met his future wife, Jackie. They were inseparable, seen hand in hand everywhere on campus.

Jerry grew up on the family dairy farm in New Middletown, OH. He loved being outdoors, working with his hands, planting, baling and gardening, or working on well-worn cars in the family garage or the cows in the barn. He also was a huge fan of western movies. He would watch John Wayne films over and over again.

He worked for Ford New Holland (later CNH) for 37 years, where he began as a product engineer and worked his way up to project manager in later years. He was admired and respected by his fellow engineers and staff, who enjoyed quoting his favorite saying: “Give it your best shot”.

He began coaching his son’s soccer team when he was six years old and continued to move up, coaching clear through his son’s high school years. His “boys” loved and respected him as did fellow coaches and parents. He pursued continuing education in order to excel in coaching for his boys.

People spoke highly of his love and attention to his family and pets. No self-sacrifice was too great, and his modest ways and bashful smile endeared him to all.

He loved going to his lakeside cottage in Michigan and later his Pennsylvania cottage, each of which he fashioned or remodeled largely with his own hands and ingenuity.
He has been a resident of Farmstead, part of Homestead Village, for one and a half years where he enjoyed walking outdoors and greeting people.

A Mass of Christian Burial will be held at 11AM on Friday, January 10, 2020 at St. Philip the Apostle Catholic Church, 2111 Millersville Pike, Lancaster, PA 17603. Interment will follow in Millersville Mennonite Cemetery. A viewing will be held one hour prior to the mass. A reception will follow at the Bachman Center at Homestead Village. Flowers will be received. If so desired, contributions can also be made to the YSUF James P. La Lumia Memorial Scholarship, c/o Youngstown State University Annual Fund, One University Plaza, Youngstown, OH 44555.

My condolances to all of the family members.  I worked for Jerry for the last few years that Ford Tractor was in Michigan until I left in mid 1988.  I always enjoyed working with and for him.  After your time of grief may you have fond memories of your time together.
Lynn McLean

I pray that God’s abundant grace and blessings be with Jerry’s family at this time of loss and in days ahead.
During several years working with Jerry at CNH, I had significant respect for his work ethic, effective and caring interaction with others, and good sense of humor. He brought a very positive, can do attitude to our workplace environment.
Earl Hudson

Please accept my Sincere Condolences on the passing of Jerome Gbur.  May he Rest in Heavenly Peace.  And May you be comforted by the love of your family and friends.