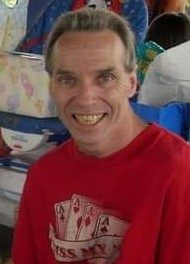 Jeffery M. Reed, 58, of Lancaster, passed away Saturday, August 10, 2019, at home. He was born in Lancaster to the late Charles Elwood Reed and Mary Jane (Minnick) Reed.

Jeff was a Tow Motor Operator for Rock-Tenn, formerly Southern Container, for 13 years before retiring in 2016. Jeffery enjoyed nature, and often spent time at the family cabin in Cameron County. He enjoyed spending time outside, riding his ATV, and playing in his Shuffleboard League. Jeff loved sports and enjoyed collecting sports memorabilia such as football cards. He was a dedicated Miami Dolphins fan. Jeff will be remembered for his hardworking spirit.

Gunna miss you, Mike. You’ve been around ever since I remember n we were pretty good friends too.  Wish there would have been more time to come n c u.  But, I’ll c u in Heaven. Tell Donna n Mom n Rose that we love n miss them. I love you brother.  Love Beanie. That was what u always called me. RIP

Another light in my life dims my path.. always been a good friend and like family for us.. I know u will watch over Kiersten…missed much my friend..always ❤️ Love ya..Connie Imhoff