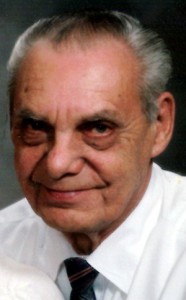 Jay E. Wayde, 86, of Lancaster, passed away peacefully at Lancaster General Hospital with his family by his side. Born in New Paris, Bedford County, Jay was the son of the late James and Ada (Brown) Wayde. He was the loving husband of the late June L. (Brill) Wayde, who passed away September 27, 2011.

Jay served in the U.S. Army during the Korean War. After being honorably discharged, he began his career of 38 years at Armstrong Corp. before retiring in 1986 as a floor supervisor.

He was a member of St. Joseph Catholic Church and enjoyed bowling, participating in numerous leagues. He also enjoyed watching golf and was an avid Steelers fan.

Jay is survived by 2 daughters: Diane L. Wayde, companion of William Dixon, of Lancaster and Donna L. Skaggs, wife of Arthur, of Lancaster; 2 grandchildren: Jennifer and Phillip, and 4 great grandchildren. He is also survived by 2 sisters: Jessie Frey of Millersville and Elsie Harbaugh of Nottingham; and many nieces and nephews. In addition to his parents and wife, Jay was preceded in death by his son, Phillip A. Wayde, 2 brothers, Albert and Harry Wayde, and 2 sisters, Dorothy Shroyer and Alice Roth.

A Funeral Service will be held at 11AM on Monday, December 22, 2014 at the Charles F. Snyder Funeral Home & Crematory, 441 N. George St., Millersville, PA 17551. Family and friends will be received at the funeral home from 10-11AM. Interment will follow at St. Joseph New Catholic Cemetery, Lancaster. In lieu of flowers contributions may be made in Jay’s name to Wounded Warrior Project, PO Box 758517, Topeka, KS 66675.

Sending love to my cousins As you navigate this I pray Christs peace is with you all. Love always, Pam (Williams) Cruz.

I loved bowling with Jay and June both.  Fond memories of them coming to my parents house in the summers for the annual bowling picnic.  God Bless you and your family at this time.
–Missy Cauler-Henry