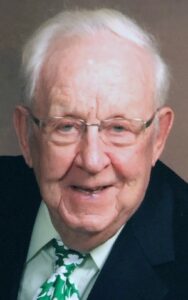 He was the husband of the late Mary Metroka Feeney, who passed away in 1988. Born in Mahanoy Plane, PA, he was the son of the late John J. and Kathleen McCauley Feeney.

Jim had worked at the R & D Facility of Armstrong World Industries for 25 years, retiring in 1993. Following retirement, he worked part time as an escort driver delivering steel beams for High Steel, Inc. He was a U.S. Marine Corps veteran, serving as a Corporal during the Korean War. He received the Korean Service Metal and the United Nations Service Metal, among others.

His service took him to such varied ports of call throughout the world such as Gibraltar, Algeria, Egypt, Australia, Hong Kong, Panama. Jim was a member of American Legion Post 56, Millersville VFW Post 7294, and Disabled American Veterans Chapter 80.

He was a member of St. James Catholic Church for over 50 years.

Jim is survived by his son, James J. Feeney companion to Debbie Brenaman of Lititz. Grandsons, Benjamin J. (Jodi Glover) Feeney, Justin J. (Melissa Swarr) Feeney and 5 great grandsons. He is also survived by his longtime companion, Norma Hetrick and her son, Blaine (Elizabeth) and their 3 children. Jim was preceded in death by his sister, Mary and brothers, Thomas and John.

Friends will be received on Thursday, November 4, 2021 from 9:30-10:30am at the Charles F. Snyder, Jr. Funeral Home & Crematory, 3110 Lititz Pike, Lititz, PA, with the Mass of Christian Burial to follow at 11am at St. James Catholic Church, 505 Woodcrest Ave., Lititz, PA. Interment in St. Joseph New Catholic Cemetery.

We are so sorry to hear of Jim’s passing. He was a great and compassionate man. He will be missed. Blessings,  Syvian and Chris Giering 🙏

To Jimmy and Family and Norma and Blaine and Elizabeth and Family:  Sorry for your Loss … thinking about you Norma and would love for you to contact me.
Barbara Konrad

Remembering Jim as a warm and caring man who always had a smile, deepest sympathy to the family!
Mary Jane Graybill

We wish to express our sympathy to the family, you are in our thoughts and prayers. I worked with Jim at High Steel. Gene & Sara Kutz