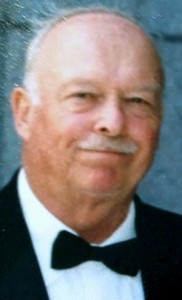 Born and raised in the Upper East Side neighborhood of Yorkville, Jim lived in New York for 83 of his 86 years. He attended Manhattan College, graduating with a B.B.A. in Labor Management and later earned an M.A. in History from New York University. He served in the U.S. Air Force and was stationed in Fairbanks, Alaska, where he served as a weatherman. He worked for the New York Department of Labor for 27 years.

He lived with his wife Mary and their children in the Inwood neighborhood on the Northern tip of Manhattan where he was active in the Church of the Good Shepherd, and its amateur dramatic troupe, the Paulist Players. He later moved with his family to White Plains, where he was a parishioner of the Church of St. Bernard, lending his fine bass voice to the choir.

Jim summered on Fire Island for 46 years, enjoying the simple, wild beauty of the Atlantic. He was an avid cyclist and a train enthusiast and he traveled extensively, both in the United States and in Europe.

A child of the Great Depression, he was a practical man and not prone to excess. It is likely that this obituary has itself already strayed into “excessive” territory. But for all his practicality, he had the distinctive aesthetic of an artist. When he was younger, he painted. Sometimes his children or his home. Sometimes a flower or a ray of light falling across a table. As he grew older, his hands shook and he no longer painted. His works hang in the homes of his children now, reminders of the beauty he saw in the world and in them.

We will miss his stories, his generous heart and his steadfast, unshakable faith in the goodness of people and the blessings in his life.

Services with interment in Gate of Heaven Cemetery in Hawthorne, NY will be private. In lieu of flowers, donations may be made to Hospice & Community Care https://www.hospiceconnect.org/give.

Please know how sad I am to hear of Jim’s passing. He visited us in Galveston and we often visited him and dear Mary in White Plains. I think part of his heart was always in Ireland. I know you will miss him terribly . May he rest in peace and joy.
Sallie Waters (Frank’s widow).

Dear Waters family: Please accept my sincere sympathy on the loss of your father, Jim. He was such a kind man and he was so sad after losing Mary. I was a parishioner of St. Bernard’s from 1972 to 1979 and knew your mom, Mary Waters who was also a member of the Women’s Guild there. We worked together on many a Christmas Fair at the church. She and Jim, like so many of the people at St. B’s were such warm and kind folk. I was a very young mother when we moved to WP and at a loss of how to make new friends and they made me feel so welcome. Years later my oldest daughter, Jeanne, learned to swim the 500 on WPHS Swim Team, following Kathleen Waters ahead of her. Mary and I watched many a swim meet there with Coach Patti Gilmartin in charge. Please know that I’m thinking of you all at this time.I’m so grateful for the memories I hold for that time of my life, thanks to people like Mary and Jim. I’ll keep you all in my prayers. God Bless You All, Ann Marie Dougherty (Mrs. Robert)

Dear Tom, Mary, Kathleen, and Family.  I read of Jim’s passing in today’s Journal News, and was saddened to hear of your loss, and the world’s loss of such a gentleman.  I don’t have to tell you but i will, that your father and I spoke so often of all three of you, and he was so proud of the fine people that you have become.  I liked your dad a great deal, and yes, i liked the fact that he liked what was important in life, and wasn’t about the excess.  In his later years, he was involved in a fender bender (well bumper bender) several blocks over, and he stopped by to tell me about it because he felt so badly about it.  I asked him where was the bumper as it was missing from the front of that Honda that he loved so much, and he pointed to the trunk.  He had just picked it up, and carried it off.  Your dad was a neighborhood staple on Greenridge Avenue–loved by all.  And your Mother Mary, was just such a fine lady.   We wish you the very best and God Bless you.  Bob, Denise, Lauren, Robert and Jennifer Maccarone

Condolences to the Waters family, May the peace of God be with you.  Jim as we called him at the Dept of Labor, was a wonderful man that we all loved.  I saw him the last time just before he left White Plains.  May your grief be short and memories long lasting.  Please accept my sincere condolences in the passing of your loved one.