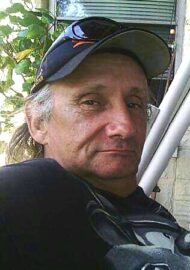 Born and raised in Baltimore, MD, Buster was the son of the late Hubert Martin Sisler, Sr. and Thelma Maxine (Shafer) Sisler.

He was a lifelong fisherman, working as the main mechanic on a fishing vessel for Omega Protein Company in Reedville, VA. Buster was a “jack of all trades, master of none.” He was free spirited. Buster dearly loved his family, especially his grandchildren who he was known to as Pop-A-Saurus.

In addition to his parents, Buster was preceded in death by his sister Maryann Sisler.

I am Hubert’s youngest daughter Maryana. Rest In Peace daddy I love and miss you I will see you once day dad and you will meet your grand babies one day.

You will be missed by so many people Hubert. Until we meet again. Rest in heaven