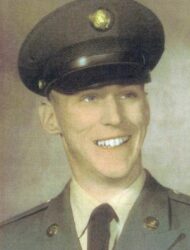 He was the husband of Janet M. Slesser Charles, with whom he would have celebrated 50 years of marriage this coming February 5th. Born in East Petersburg, he was the son of the late Herbert M., Sr. and Isabel Koch Charles.

Herbie was a decorated veteran of the US Army, serving as an SP4(T) as a M60 machine gunner with the 82nd Airborne Division. He was severely wounded in combat, being awarded the Purple Heart, Bronze Star and Army Commendation Medals.

Despite his disabilities, Herbie was a perfectionist when it came to taking care of his yard: he mowed the grass, planted shrubs and bushes and enjoyed landscaping; there was nothing he wouldn’t try to do. He followed the stock market meticulously and was as shrewd investor. He had enjoyed fishing and, in the past, hunting and was a member of the East Petersburg Sportsmans Assn.

He was a wonderful husband and great dad, and everyone who ever met him loved him.

Herbie was a long-time member of Trinity United Church of Christ in East Petersburg.

In addition to his wife, Janet, he is survived by his daughter, Beverly Marie Charles of Lancaster, and his sisters, Shirley Baer of Lititz, and Janet Sweigart of Lancaster. He was preceded in death by his sister, Nancy Rogers.

We will miss you. Love you always.

Hi Janet
I am so sorry for your loss. I am currently out of town and will be unable to come to any services but please know you all will be in my prayers! Cherie Cataldi
Trinity UCC