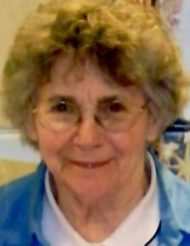 Helen E. Warfel, 91, of Lancaster, passed away Wednesday, April 18, 2018 at Conestoga View Nursing Home. Born in Lancaster, PA, she was a daughter of the late Joseph B. F. and Hannah (Pietch) Walton, and the beloved wife of the late John Warfel who passed away in 1982.

Helen worked as an Assembler for Slaymaker Lock Factory, Lancaster, with over 32 years of service. She enjoyed fishing and was a fan of the Hershey Bears. In her later years, she became an avid walker and could be seen walking all over Lancaster City.

Helen is survived by two sisters, Janet Walter and her husband Melvin of Manheim, and Martha Little and her husband David of New Providence, and two brothers, John Walton and his wife Charlene of Mount Joy, and Joseph Walton of Lancaster. Also surviving are several nieces and nephews. In additional to her parents and husband, she was predeceased by brothers George E. Walton, Joseph B. F. Walton, Jr., and Harry Walton, and sisters Mary Shenk and Betty Miles.

Family and friends are invited to attend a funeral service which will take place at 1:00 PM on Thursday, April 26, 2018 at the Charles F. Snyder Funeral Home & Crematory, 414 East King Street, Lancaster, PA 17602, where a viewing will take place from 12 to 1PM. Burial will follow at Conestoga Memorial Park. In lieu of flowers, memorial contributions in Helen’s memory may be offered to the Water Street Mission, 210 South Prince Street, Lancaster, PA 17603.