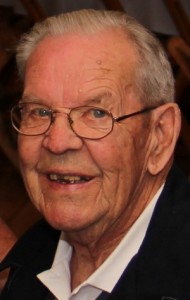 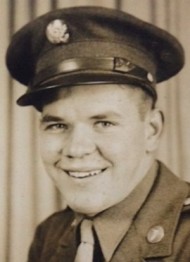 Harry M. Adams, 93, of Lititz, died peacefully on Sunday, January 3, 2016 in the residence of his daughter.
Born in Lancaster, he was the husband of the late Margaret F. (Roland) Adams, who died October 3, 2010. They had been married 62 years. He was the son of the late Harry K. and Lizzie Stormfeltz (Heinaman) Adams.
Harry was employed as a stencil maker and foreman by Armstrong World Industries for 42 years until his retirement. He also enjoyed farming part-time, growing tobacco, corn, and hay. His green thumb was also evident in his love of gardening. Post-retirement, he worked at Garden Spot Auto Auction for many years.
Harry was an immensely proud Army Veteran of WWII, having served as a medic from 1942 to 1945 in the European Theatre.
He enjoyed sports and the outdoors, especially coaching little league baseball, hunting, fishing, horses, his beagles and family trips to Cape May and other beaches. He adored his children, grandchildren, and great-grandchildren. Harry also served as a Cub Scout leader and Webelos leader, and was recognized as Webelos Leader of Year.
Harry was of the Lutheran faith.
He is survived by his children: Lois Hess and her husband Larry, with whom Harry resided, of Lititz; Marie Witt and her husband Carl of New Providence; Karen Sowers and her husband David of Lancaster; and Chuck Adams and his wife Mary Anne of Naperville, IL; 13 grandchildren; and 21 great-grandchildren. He was preceded in death by a grandson, Timothy Sowers; 5 sisters, and one brother.
A Memorial Service will be held at 2 pm Saturday, January 9, 2016 at Charles F. Snyder, Jr Funeral Home & Crematory, 3110 Lititz Pike, Lititz with Pastor Keith Walker officiating. Family and friends will be received from 12 to 2 pm prior to the service at the funeral home. Inurnment, with full military honors, will be in Machpelah Cemetery, Lititz.
Kindly omit flowers. Memorial contributions in Harry’s memory may be made to Pennsylvania Wounded Warriors, Inc. 1117 Country Club Road, Camp Hill, PA 17011; or to Lebanon VA Medical Center online at https://www.pay.gov/public/form/preview/pdf/48119268.

My sincere condolences to the Adams family. May you have wonderful memories of times spent together and have comfort in God’s promise found at Acts 24:15. My deepest sympathy to you all.

It was with deep sorrow that I learned of Harry’s passing.
I will always recall the pride in his eyes when he shared with me the photo from WWII of him with Generals’ Patton & Eisenhower.
Even though I can not be there on Saturday because of a previous commitment, know that my thoughts and prayers will be with you.
State Representative Steve Mentzer and Staff
97th Legislative District