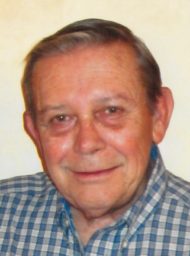 Gordon P. Walker, 79, of Lancaster, passed away on Tuesday, November 28, 2017 at Country Meadows of Lancaster. He was the husband of 51 years, to the late Mary Ann (Kaiser) Walker, who died in 2015.
Born in Pittsburgh, he was the son of late Gordon S. and Agnes (Duke) Walker. Gordon earned his Bachelor’s degree from the Citadel and proudly served in the U.S. Army during peace time. Following his honorable discharge, Gordon went to work for Armstrong Industries and retired as a Financial Manager in 1996.
Gordon was a member of St. Peter’s Lutheran Church, Lancaster. Gordon loved to play tennis in his early years and enjoyed golfing later in life. He was an avid sports fan, but especially loved the Pittsburgh Pirates. He helped coach Little League and was active in youth sports. Gordon was a Mason and also participated on the board of the Blind Association.
Gordon is survived by his two children: Amy Brennan, wife of Buddy, of McDonald, PA and Scott Walker, husband of Bobbi, of Pittsburgh; four grandchildren: Luke and Ally Brennan and Joshua and Jake Walker; and his twin sister, Beverly Angle, wife of Clyde, of Lancaster.
Memorial Services will be held at 11AM, Saturday, April 7, 2018, at the Charles F. Snyder Jr. Funeral Home & Crematory, 3110 Lititz Pike, Lititz, PA 17543. Family and friends will be received from 10AM to 11AM. Private interment was held in St. Peter’s Lutheran Church Cemetery, Lancaster, PA.
In lieu of flowers, please consider a donation to St. Peter’s Lutheran Church, 10 Delp Rd. Lancaster, PA 17601.

We only just heard of Gordon’s passing. He was Jack’s Citadel roommate…and dear friend. He and MaryAnn visited us in Daytona Beach when on their honeymoon in the early 60’s. I’ve been trying to reach him for some time. What joy he had in his kids and grandkids…I know he is mssed.
Jack and Gayle Bishop

Our thoughts and prayers are with you. Carl and Hilda Wunderler   The Citadel 1960

We are so sorry to hear of Gordon’s passing. We were old, dear friends for many years, Our thoughts and prayers are with you.
Andy & Diane Newton

We were so sorry to hear about Gordon’s passing. We were very old dear friends. Our thoughts and prayers are with you.
Andy & Diane Newton

Dear Amy & Scott, I am very sorry to hear of your father’s passing. You are in my thoughts & prayers at this time. Fondly, Joanie Cashdollar

Sorry to hear of Gordons passing.  I worked with him for many years at Armstrong and we traveled together several times for business purposes.  He was a great and respected individual and I am sure will be missed by his family.  My condolences to them
Dan Killian, Royal Palm Beach, FL