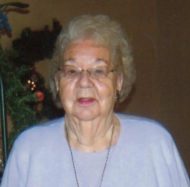 Gladys J. Adams, 95, of Mountville, passed away on Wednesday, April 21, 2021, at Evergreen Estates Retirement Community in Lancaster. Born in Lititz, she was the daughter of the late Lester and Ella Mae (Hagy) (Wike) Ellinger. Gladys was preceded in death by her first husband, Fred H. Howard, a local homebuilder who passed in 1971, and her second husband, Donald Adams, who passed in 2013.

A 1943 graduate of Lititz High School, Gladys following marriage initially was a homemaker while her children were young. Active in the community, she was the first woman appointed to serve on the Manheim Township Planning Commission. Later in life she worked for many years as a Property Manager for Coldwell Banker Real Estate. She actively golfed with the woman’s league at the Four Seasons Golf Club until she was 84 years old. She was also an active bowler. She was an avid reader, loved to crochet, had a collection of more than 400 elephants, and was a fan of the Philadelphia Phillies. Gladys was a former member of Lititz Moravian Church for more than 40 years.

Gladys is survived by her son, Attorney Preston Howard and his wife Alexis, of Las Vegas, NV. Also surviving are two granddaughters, Taylor and Logan Howard. Along with her husbands, Fred and Donald, she was predeceased by her son, Tracy Howard, husband of Terrie formerly of White Sulphur Springs, WV; a grandson, Christopher Howard; her sister, Gloria Rowland; and her brother Bruce B. Wike.

Gladys’ final resting place will be at the Moravian Cemetery in Lititz. Services will be announced at a future date. In lieu of flowers, contributions in Gladys’ memory may be offered to the Moravian Church in Lititz, PA or, the ASPCA.