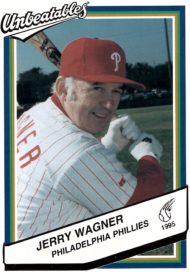 Gerald E. “Jerry” Wagner, 90, of Lancaster, passed away Thursday, February 11, 2021 at The Glen at Willow Valley. He was born in Lancaster to the late Lawrence and Ida (Ault) Wagner. Jerry enjoyed 56 wonderful years with his wife Leona A. (Darnell) Wagner before her death in 2006.

A 1948 graduate of J.P. McCaskey High School, Jerry was very active in sports. He was inducted into the Amateur Softball Association of PA Hall of Fame in 2008. Jerry enjoyed golfing with his friends at many area courses, he coached Red Rose Midget Football in the 1960’s, and he was an avid Philly sports fan.

In addition to his parents and wife, Jerry was preceded in death by his son, David C. Wagner in 2002, and his ten siblings.

Private graveside services will take place in Millersville Mennonite Cemetery. Memorial contributions may be made to the Alzheimer’s Association: Greater PA Chapter at www.alz.org

To Jerry’s family, I worked with Jerry at Tyco Electronics, What a “cool cat”, such a nice Man! We had many great conversations. I’m 61, there was no generation gap with Jerry, just fun to be around. He reminded Me of My Dad (also 90). I would see Him at the Amvets from time to time, Loved that Guy!  RIP  Brother.  Sincerely Keith P. Musser

To my wonderful dancer Good Bye May God hold you in his arms forever. We spent many times dancing & went on a cruise to Alaska. Condolences to his family
Sandy Lovelidge

Dear Debbie and Diane,
I just saw your dad’s obit in the paper.  I immediately smelled hazelnut coffee in my mind!  I fondly remember your parents kind hospitality around the dining room table on Hershey Ave.
Jerry was a kind and gentle soul who was patient and brave in the face of life’s trials and tribulations.  It was an honor to serve as his pastor.  I can’t think of anyone more worthy of heaven’s peace.
Love, Pastor Dave Kreider

So sorry to hear the passing of your dad. I remember him so fondly, going to farnum for baseball games and hanging at your house while growing up. My condolences to you and Debbie and the rest of your family. Treasure the memories. Anna Gianopoulos Smith

Jerry and I were friends since junior high school.  We were neighbors on Hershey Avenue for several years.  I also worked at Business Press with Jerry. He was really a good friend.
Vernon Gunnion